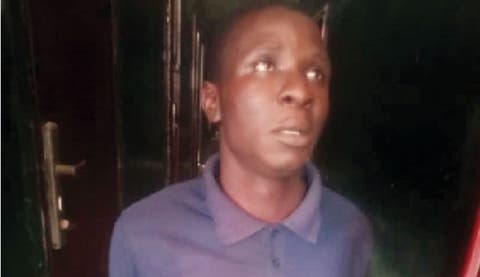 Twenty-five-year-old Bankole Wasiu was arrested in Ogun State few hours after he allegedly raped a 70-year-old woman, who is his landlady’s friend, while she was asleep. Bankole, who works as a Caterpillar truck driver, gives DAUD OLATUNJI his account of what happened

How did the incident happen?

I was on a bench in the workplace on June 3, preparing for work when some men arrived. My workshop is around Abule, along Robiyan, in Abule Ijoko, Agbado area, Ogun State. One of them sat on my right and the other sat on my left. They grabbed my trousers and said they were arresting me for committing a crime. I asked for their identities and they said they were vigilantes. They handcuffed me and forced me to follow them to their office.  When we got to their office, they told me to confess to the crime I committed overnight. I was shocked; I told them I didn’t commit any offence overnight. After saying that, they started beating me with their sticks to the extent that my clothes got torn.

The old woman they alleged that I raped used to visit my landlady where I stay. At times, she would ask me to buy her food and I would oblige her. At times, she would ask me to buy her alcohol and I usually would. I didn’t know anything about this until those vigilantes came to arrest me. They said I should confess that I raped the old woman, which I never did. They brought the woman to their office and asked me to identify her. I never claimed that I did not know her. I told the vigilantes that I knew the woman through my landlady.

The next question they asked me was, what took me to the old woman’s room at midnight? I was surprised because I did not understand what they were talking about. I told them I had not slept in my apartment for some time because of a prophecy my fiancée revealed to me. She said she dreamt I would be framed for something I didn’t do. I was advised to stay away from home for some time and I did.

How close is your house to the woman’s house?

The old woman’s house is not far from my apartment. I used to pass the woman’s house and almost everybody in the area knows me. When they invited the woman to their (vigilance group’s) office, she reluctantly said I was the one who raped her. I denied the allegation immediately.

How did your belongings get to the woman’s apartment?

I do not know how they got my cap, clothes and torchlight, which they showed to me as things that would be used as exhibits. I told the officers of the vigilance group that I wore the clothes to work on the previous day and spread them outside to dry because I had been in the rain.

I also identified the torchlight as mine but what happened was that I drank two bottles of beer the night before I was arrested. I don’t know why I did not open my door, which made me sit on a mattress that was kept in one corner outside my apartment. At that time, some kids came to meet me and we played together. In fact, we drank the beer together. I don’t know what happened after that until I woke up around 10pm. I left the house immediately because my fiancée had warned me to stay away from the house. Part of the prophecy she revealed to me was that some people were planning to implicate me.

Were you never at the woman’s apartment?

I have never been inside the woman’s apartment since I started living in that area. I would only pass by her house whenever I went work or somewhere else. I have never raped anybody in my life since I was born. I swear on the Holy Qur’an; I never raped that woman. I swear to God. I only know the woman through my landlady; she used to visit my landlady. The woman used to ask me to buy alcohol for her and, sometimes, I would give her money instead. Aside from my landlady, there is another place the woman mostly used to sit. There, a woman sells alcohol. Whenever I saw her around there, she would ask me to buy her alcohol, and I always did.

The police said one of the neighbours of the victim drove you away from the old woman by hitting you with a stick. Is it not true?

Nobody hit me with a stick until I got to the vigilantes’ office. They were torturing me anyhow. I don’t know anything about this case; I was implicated. I would never have sex with a 70-year-old woman.

I have never had a love affair with an old woman or a housewife; everyone in my house can testify to the fact that I never brought anyone who falls under the two categories to my apartment. Even my fiancée can testify to it.

Some people have alleged that you wanted to use the woman for money ritual. How true is that?

I have been hearing that since I was arrested. Some people have even asked if I am an Internet fraudster and I have been telling them that I’m not a Yahoo boy (Internet fraudster) and there is nothing that would make me rape such an old woman. The vigilantes did not allow me to express myself; they were just beating me and asking me to confess I committed a crime I did not commit. I was eventually transferred to a police station in the area. While they were interrogating me, some of the policewomen told their colleagues that I could not have raped such an old woman and that if I had committed the offence, the woman would have been dead.

That was the reason why the divisional police officer transferred the case to another police division in Ayinla. On our way to the police station, the vigilance officer that claimed to have hit me in the back with a stick warned the woman not to change her statement whenever anybody asked her what happened. The woman had already told the vigilantes and one of my neighbours whose room was next to mine that I did not rape her but they would not listen.

I only took three bottles of beer; I did not get drunk. Moreover, I usually drink more than that and I’m never intoxicated.

People have suggested castration as punishment for rapists, do you agree?

Yes, I agree with that punishment. Any man found guilty of rape should be castrated.

What if you are later found guilty of rape, should they castrate you?

I did not rape the woman. In fact, the police at Ayinla Division have requested that the woman should bring a medical report to ascertain if it was rape or not, but she refused to go for that.

She gave an excuse when the police officers at the Police Headquarters, Eleweran, Abeokuta requested a doctor’s report. The woman did not allow anybody to test her even after we got to this place. The woman and her family members have said they are not interested in the case again but the police have refused (to let me go). They asked for my family members too and I told them that my father resides in Kogi State and I do not have any family member in Lagos. After interrogations, the police called my father on the phone to explain the situation to him but he told them I could not commit such an offence.

Are your parents aware of what happened to you?

Yes, the police officers called my father on the phone but he lives in Kogi State, and because of the distance, he could not show up at the police station.

What do you expect to get in court?