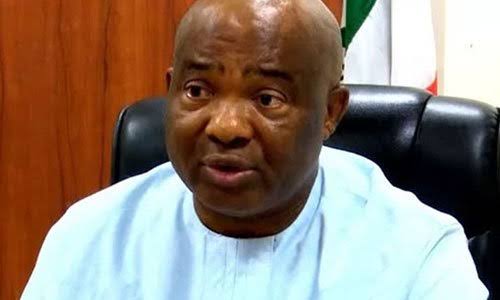 Imo State Governor, Hope Uzodinma, has ordered that Tenssy Professional Services, a company allegedly owned by Izuchukwu Obasi, the son of the Vice-Chancellor of Imo State University, Owerri, be stopped from collecting tuition for the institution.

The Chief Press Secretary to the governor, Oguwike Nwachuku, said Uzodinma gave the order during the State Executive Council meeting, which held at the Government House and was presided over by the governor.

He also disclosed that the governor ordered that state Commissioner for Education, Prof. Bernard Ikegwuoha, to issue a query to the IMSU VC, Prof. Adaobi Obasi, for allegedly not utilising the February subvention for the payment of salaries of lecturers and non-academic staff of the university.

Nwachukwu said, “The council noted that following the rot in the Imo State University, the government has set up a committee working on a White Paper that will soon be made public.

“It also said that despite the monumental fraud and revenue leakages in the university, the workers had been paid their salaries and allowances up to May 2020. It, however, frowned on a situation, where the university could not pay workers their February salaries after the government had released January and February subventions to the university authority.

“To this effect, the government has directed the Commissioner for Education, Prof. Ikegwuoha, to issue a query to the vice-chancellor of the university on why she could not pay when the money had been released to her.

“The government also discovered that a company called Tenssy Professional Services, which collects school fees for the university, is also owned by the son of the vice-chancellor and that the same consultant collects fees from other tertiary institutions in Imo State.