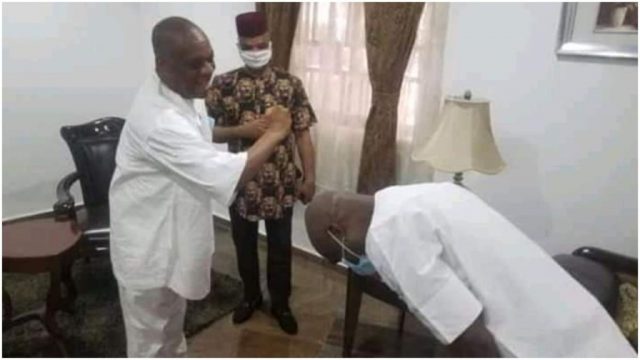 The Secretary, All Progressives Congress, APC, in Abia State, Barrister Perfect Okorie, has criticized the call for the resignation of the Speaker of the State House of Assembly, Hon Chinedum Orji, over his visit and reconciliation with ex-Governor, Orji Uzor Kalu.

Okorie, described such call as baseless, as it was allegedly targeted at heating up the Abia polity unnecessarily.

Kalu is the leader of the opposition caucus of the APC in the State and current Senator representing Abia North Senatorial district in the National Assembly.

The Speaker was quoted as asking Senator Kalu to return and take his rightful position in the State and further described Kalu as the “Authentic leader” of Abia State.

Orji stated this when he led a delegation from Abia State, mainly his kinsmen from Umuahia on a solidarity visit to Senator Kalu who was released from the federal prison following a Supreme Court verdict dismissing criminal charges against him and ordering a retrial.

However, the Abia APC Scribe, Perfect Okorie, in a statement, on Tuesday, said “the call for the Speaker of Abia State House of Assembly to resign is uncalled for and baseless; they should read the Constitution. Before you call for the resignation of the Governor or Speaker of the House, he must have committed an impeachable offence and none has been shown in this regard.

I regard that as a baseless talk and the APC as a party founded on the principles of democracy, would never support the idea. The Speaker cannot be impeached or removed over a non-issue. the state”.

Meanwhile, the People’s Democratic Party-led Abia State Government has sued for ceasefire and peace among leaders of the Peoples Democratic Party, PDP, following calls for the resignation of the Speaker of Abia House of Assembly, Hon Chinedum Orji.

This was contained in a release signed by Governor Okezie Ikpeazu’s Chief of Staff, Anthony Agbazuere, on Tuesday.