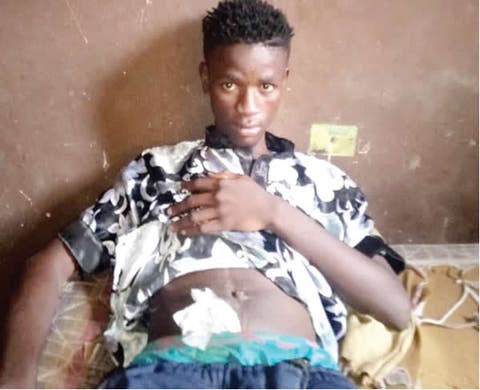 An ex-employee of the Lagos State Waste Management Authority, Babatunde Akindele, has been in pain after losing the money his family put together for his colostomy reversal surgery to hoodlums in the Surulere area of the state.

FASTLOADED TEAM gathered that for three years, Babatunde had been passing out excreta through colostomy, a surgical procedure in which an artificial opening is made in the abdomen for excreta to pass through instead of the anus.

The 21-year-old had gone to withdraw the money from the bank and was returning home when a yet-to-be-identified person reportedly asked him for direction to his destination in the Itire area of Surulere.

While he was assisting the person, it was learnt that the hoodlums intercepted him and dispossessed him of his mobile phone and the money.

He was ordered by the hoodlums to flee from the scene or risk being hurt.

Babatunde said that he broke down in tears while explaining the situation to his mother and siblings when he got home, adding that the stolen money was for his colostomy reversal surgery at the Lagos State University Teaching Hospital.

He said, “Three years ago, I could not defecate normally, so after some diagnoses, I had a surgery, which enabled me to defecate from the side of my stomach into a colostomy bag, instead of through my anus. I usually go for check-ups so that my condition can be monitored.

“As I speak with you, the doctor has informed me that what was brought out beside my stomach, which I use for defecation, is due to be taken back inside and I needed to undergo another surgery for it to be done. But I don’t have money as I have not been working after the initial surgery.”

Babatunde, who said he was in Senior Secondary School 2 when his principal stopped him from schooling because of his condition, urged Nigerians to assist him with money for the surgery so that his dream of becoming a medical doctor could be achieved.

He said, “When I went to the theatre, I was told that the surgery would cost N100,000 and due to the urgency of my surgery, my mother sent me to withdraw all her savings for the surgery. When I got to the bank, I withdrew N24,000, but on my way back, an old man approached me for direction to the Itire area, which is along my path, and so I agreed.

While on our way, I never knew that some hoodlums, who were working with the old man, were tailing us until I was cornered, threatened and dispossessed of my phone and the money. The N24,000 my mother had helped me raised was stolen and I have no other hope of raising another money.

I was working with LAWMA before the surgery after which I resumed work to raise money for further treatment, but when my boss got to know that I was defecating through the side of my stomach, he asked me to stop so I that could treat myself and since then I have not been able to secure another employment. I am pleading with Nigerians to assist me with money for the surgery so that I can get my life back on track.”

Medical reports about Babatunde’s condition were made available to our correspondent. His LASUTH card number is 421118.

Babatunde’s widowed mother, Bose, while lamenting the hardship she had been facing as a result of her son’s illness, said when he was asked to stop working, she pleaded with his supervisor to allow her to be working on his behalf so as to use the salary to treat his condition.

The supervisor allowed me to be working in his place and the money I received is what I have been using to take care of him. The stolen N24,000 was the little money I managed to save before we were told that he was due for surgery. I am a widowed mother of four; Babatunde is my first son and I don’t want to lose him. I plead with Nigerians to please assist him with the surgery,” Bose stated.