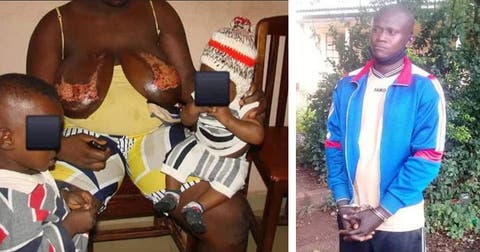 One Emmanuel Opoku, who allegedly poured hot water on his wife’s two breasts, has been remanded by a magistrate’s court sitting in Enugu South Local Government Area of Enugu State.

The accused was charged with assault occasioning grievous bodily harm on his wife, who is nursing a child at the time of the incident.

It was gathered that the legal team of Women Aid Collective, WACOL, and other pro bono lawyers, led by WACOL’s Head of Legal Unit, Mrs Ijeoma Ezeude, Onyeonagu and Dr. Nick Agbo, worked in conjunction with the police prosecutor, Inspector Innocent Otibe, to vehemently oppose the bail application.

The magistrate, who refused the bail application on the ground of public interest remanded the man who poured water on his wife’s breasts person in Enugu police custody.