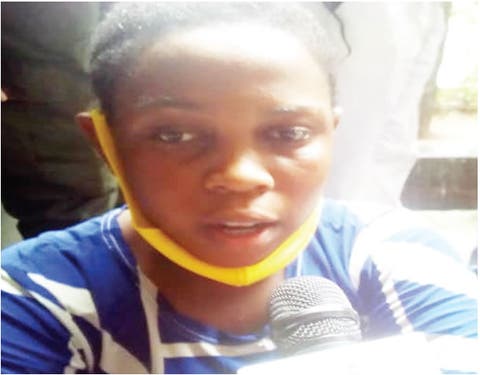 A 19-year-old girl and member of a cult known as the Marine Girls, Blessing David, on Thursday confessed to having slept with 10 men after she was initiated into the group.

The teenager, who was initiated along with other girls, said sleeping with the men was part of the initiation rites.

She said this at the headquarters of the Edo State Police Command in Benin City, when the Commissioner of Police, Mr Johnson Kokumo, paraded 15 armed robbery suspects, six cultists, three kidnappers and four murder suspects.

The cultists paraded were three teenage girls, who were said to be members of the Marine Girls.

Blessing told FASTLOADED TEAM that she was initiated into the group in 2019.

“My name is Blessing David. I was initiated into the cult last year. I slept with 10 men as part of the initiation process,” she stated.

Another 16-year-old girl, Ada Emeka, said she also slept with 10 men as part of the initiation rites.

The CP said two suspected armed robbers were killed in the early hours of Thursday by operatives of the command.

“An eight-man robbery gang, who operated at the Amagba area of Benin City, robbed 13 houses, injuring victims with machetes and other weapons during the operation that started around 12am on Thursday and lasted till 3am. The police engaged them in a gun duel and in the process, two of them were killed,” Kokumo stated.

One of the victims, who gave his name simply as Eghosa, said he was sleeping with his wife in the bedroom when he suddenly saw torch lights pointing at them.

He said, “The robbers removed the window and used blocks to hit the door protector repeatedly before it gave way. They entered our room, collected the money available, injured my mother and my newborn baby with machetes, and smashed my wife’s iPhone on the wall when it was obvious that they could not make use of the phone.

“When they left my place, they robbed about 13 other houses before people called the vigilante group and the police. When the police came, they started exchanging gunfire with the robbers. Two of them were killed and one was arrested. This one was the one who smashed my wife’s iPhone.”