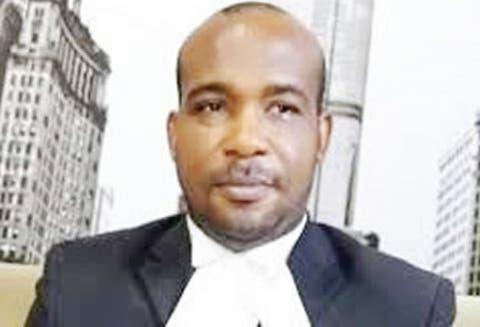 Some human rights groups have demanded the release of a lawyer, Emperor Ogbonna, who was allegedly re-arrested on court premises in Aba, Abia State, by personnel of the Department of State Services.

The Citizens’ Gavel, Socio-Economic Rights and Accountability Project, Paradigm Initiatives, Civic Media Lab, CODE and Civic Hive, urged all stakeholders in the justice sector to speak against the disregard for the rule of law by the DSS.

The groups, in a statement signed by the Communications Associate of Citizens’ Gavel, Taiwo Makanjuola, and titled: ‘Fundamental rights abuse and unlawful detention of Emperor Ogbonna Esq. by the Department of State Security Service’ alleged that personnel of the DSS re-arrested the lawyer on April 28, 2020, immediately he was granted bail by the court.

The groups noted that Ogbonna was alleged to have in a Facebook post criticized the Abia State Government.

Ogbonna, who was apprehended following the governor’s complaint to the police, was said to have denied being the originator of the post and explained that he only shared it.

The groups noted that Ogbonna was subsequently charged and was remanded in a correctional centre pending the Director of Public Prosecutions’ legal advice.

According to the groups, Ogbonna’s counsel filed a bail application on behalf of his client, which was granted by the court, adding that the DSS re-arrested him on the court premises.

The statement read in part, “On March 28, 2020, Mr Ogbonna’s lawyer, Martin Ladu, was suddenly waylaid as he was exiting the court premises. His car was blocked by three government-owned SUVs. The occupants of the vehicles came out and interrogated him as to the whereabouts of the defendant. He informed them that the defendant was still in prison because the bail conditions had not been met. His car was thoroughly ransacked by the security details despite his protests.

“Upon the perfection of Mr Ogbonna’s bail process, a discreet message was sent to the prison for his release, but alas, the officials of the Department of State Services got wind of it and came to re-arrest Ogbonna and after much resistance, he was re-arrested on April 28, 2020, immediately he was released on bail. He was taken to the offices of the DSS and has not been seen since.

Till date, Mr Ogbonna has not been taken to court on any new charge and his existing bail has been rudely impeded by officials of the DSS. It also became public knowledge that Emperor Ogbonna was discreetly moved to Abuja by the DSS after a long period of stalling his defence team’s request for his immediate release.

On June 29, 2020, the Federal High Court sitting in Umuahia, Abia State, in a ruling ordered the immediate release of Mr Emperor Ogbonna from the custody of the DSS or his arraignment. The court also restrained the DSS from re-arresting him. The court further awarded the sum of N1,500,000 against the DSS as damages.

“We wish to state at this point that the actions and inactions of the DSS are a major slap on the face of the rule of law and the powers of the court. It also amount to a continuous and gross breach of Mr Ogbonna’s right to liberty, which is protected and guaranteed under Chapter IV of the 1999 Constitution (as amended)

Gavel, SERAP, Paradigm Initiatives, Civic Media Lab, CODE and Civic Hive use this medium to call on all stakeholders in the justice sector of this nation, civil societies and liberty organisations, international bodies like the African Union, ECOWAS, the European Union, etc and other well-meaning Nigerians to rise against this tide of illegality and utter disrespect for the rule of law by the DSS.

“We cannot fold our arms and continue to condone this show of shame where the orders of the court are practically worthless and ineffective. It is a steaming volcano waiting to explode and plunge us all into anarchy. We have to resist this. We have to collectively uphold the dignity and sanctity of our courts of law and their orders.”