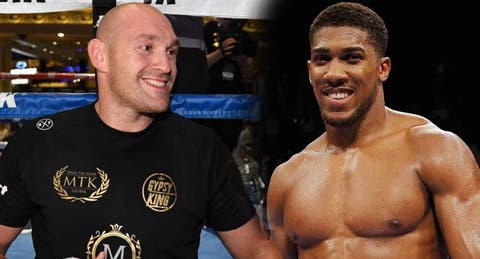 Anthony Joshua and Tyson Fury met in person for the first time in several years as they came face-to-face in Marbella on Saturday.

The heavyweight champions, who previously sparred back in 2010, shared a conversation in Puerto Banus as the ‘Gypsy King’ pulled his car over and spoke to AJ out of the window.

No video has yet emerged of the discussion, though Joshua quickly posted the picture to his social media pages after the encounter.

He teased a potential bout between them by captioning it: “Sweeeeeeeeeeeet Caroline!! Ohhhh ohhh ohhhhh.”

Fury reacted by reposting Joshua’s picture to his own Instagram story.

Joshua and Fury currently reign as the two kings in boxing’s glamour division, with Anthony holding the WBA, IBF and WBO belts while Tyson has the WBC crown.

The two Brits have agreed on financial terms to fight twice in 2021.

These terms state that the first bout will be a 50/50 purse split, while the rematch will be a 60/40 split in favour of whoever wins the first.

It is unknown where and when the fights are going to happen, though the most likely venue seems the Middle East.

Last week, while at the Opium Beach Club taking selfies with fans, AJ was filmed from a distance by a group of Fury’s supporters.

They then started chanting, ‘There’s only one Tyson Fury.’

He responded by laughing and jokingly sticking his middle finger up at them.