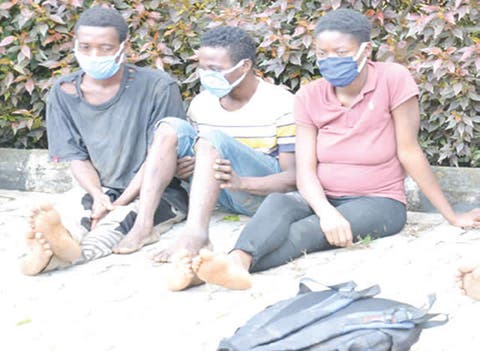 The Ondo State Police Command has arrested a 23-year-old woman, Iyabo Julius, for allegedly conniving with her lover, Adedayo Sunday, to rob and kill a motorcyclist, Suleuman Azeez.

The incident was said to have happened in the 12/12 area of Ore in the Odigbo Local Government Area of the state.

The police also arrested one Jeremiah Monday over the crime.

Parading the suspects at the police headquarters, Alagbaka Akure, the state Commissioner of Police, Mr Bolaji Salami, said the deceased was Iyabo’s former boyfriend and she asked the new lover to kill him to make it easy for them to get married.

The police boss said, “One Suleiman Azeez, 25, a commercial motorcyclist, left home for his daily bread with his Bajaj motorcycle but did not return home. His body was later found in a pool of blood around the 12/12 area Odigbo via Ore.

“The case was subsequently transferred to the Special Anti-Robbery Squad, Akure. Upon discreet investigation, detectives trailed the suspects, one Adedayo Sunday, 25, and Jeremiah Monday, 20, both of Odigbo via Ore, who were arrested where they had gone to sell the stolen motorcycle.

“On interrogation they confessed to the crime and said the former girlfriend of the deceased, one Iyabo Julius, 23, who is now Adebayo’s lover, asked them to rob her former boyfriend of his motorcycle and equally kill him so that she and her new lover could get married.”

The commissioner explained that based on the confession of the suspect, detectives arrested Iyabo.

The police boss also paraded 20 other suspects for allegedly being involved in crimes such as robbery, cultism and kidnapping, while some weapons were recovered from them.

The items recovered from the suspects include a Toyota Corolla car, one TVS motorcycle and the sum of N231,000.

Salami said all the suspects would soon be charged.

Jail-breaks: NCoS yet to confirm number of escaped inmates —Edo