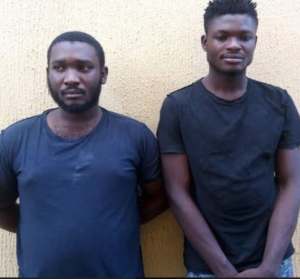 Attempts by two suspected members of a robbery gang to snatch a car form an Uber driver weekend, in Anthony area of Lagos has been foiled by operatives of the Special Anti-Robbery Squad, SARS Lagos State Police Command.

The suspects: Sule Abdulkareem and Celestine Joseph, who were former dispatch riders with an online trading platform, booked the driver of the Toyota Corolla car, from Keffi, Obalande area of the state, to Maryland.

However, on reaching an isolated place at Anthony Oke, they ordered the driver to stop, pointing a gun at him. Sensing danger, the driver reportedly drove on, until he stumbled on the SARS operatives.

During interrogation, one of the suspects, Abdulkareem, 29, said “My friend Celestine, (pointing to his partner) needed N1.6 million to invest in a restaurant and bar business on the Island. We were both dispatch riders at Jumia before we left.”

Everyone we approached for the loan, refused to assist us. We also approached the bank and were told to get collateral. In our bid to get that, we decided to rob a car. Unfortunately, it boomeranged”.

On his part, Joseph, said “I ordered for the Uber ride. The plan was to snatch the car from the driver when we got to an isolated

and dark place. But he refused to stop at the designated place and there was no other convenient place to strike. The pistol found in our possession was given to us by a friend. We used it for protection”.

The resolve of the command to rid the state of criminal elements, according to the command boss, CP Hakeem Odumosu, while speaking on the arrest, was total, adding that the suspects would be charged to court.