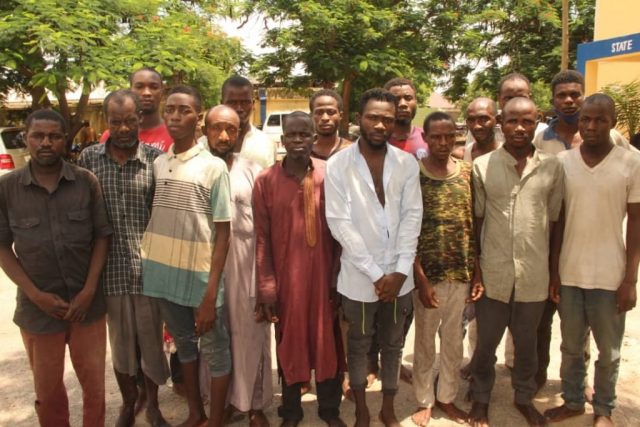 The Bauchi State Police Command has informed that 27 suspected pedophiles and rapists were arrested across the state between June and July for alleged defilement of minors and rape.

This was contained in a statement signed by the command’s Police Public Relations Officer (PPRO), Ahmed Mohammed Wakili and made available to DAILY POST in Bauchi on Thursday.

Wakili, a Deputy Superintendent of Police (DSP), stated that the police made the arrests in collaboration with individuals and groups in their respective communities as key drivers of policing.

According to him, the 27 suspected pedophiles and rapists as well as five other suspects were arrested in connection with offence against property and public peace.

Among those arrested was one Saleh Hassan (29) for allegedly defiling a five-year-old girl at Unguwar Hardo.

A non-govermental organisation, Prison Inmates Development Initiative (PIDI-Nigeria) had raised an alarm over the alleged defilement of the girl by the suspect and called for a thorough investigation of the case with a view to bringing the suspect to book.

According to the PPRO, the suspect was brought to the Township Police Station in Bauchi by peace and security committee members attached to Unguwar Hardo in Bauchi, adding that the police are investigating the matter.

“On the 16/07/2020 at about 1800hrs peace and security committee members attached to Unguwar Hardo brought one Saleh Hassan ‘m’ aged 29years of Unguwar Hardo, Bauchi to the township police station that on the same date at about 1415hrs he lured one Mariya Ummi Sale ‘f’ aged 5 years of same address to his room and had carnal knowledge of her, which as result she sustained serious injury in her private part. However, the suspect was arrested meanwhile, investigation is in progress,” DSP Wakili stated.

The police spokesman informed that four men were arrested at Yelwa Makaranta area of Bauchi metropolis for criminally conspiring, adopting and gang raping a 15-year-old girl in the area.

Those arrested in connection with the case, according to Wakili, are Kabiru Saleh (25); Abubakar Moh’d (27); Abdullahi Abdullahi (28) and Christopher Luka (26)