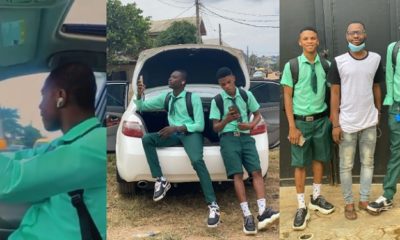 It has been revealed that the trending photos and video of secondary school boys who resumed school with iPhone and Benz car is comedy skit from comedians called ‘‘Benefit Boys’.

Their videos and photos have been trending on social media after they posted a video where they chased their physics teacher out of their car.

For Benefit Boys, resumption is just to show off their newly purchased car, iPhone, boots and other expensive items. In photos shared, the comedians were spotted with their car keys and iPhones.

The particular video which gained massive attention was the video which showed them chasing their physics teacher out of their car after driving long distance without getting to his house.