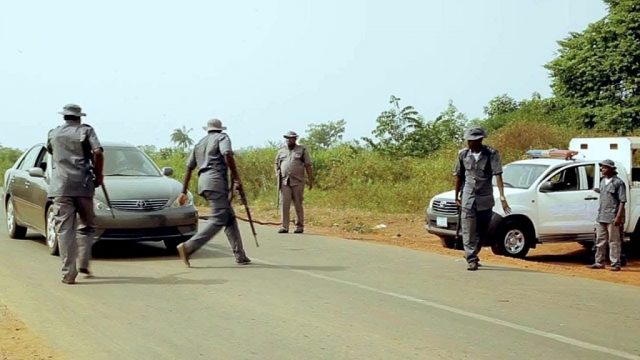 A yet to be idetified officer of the Nigeria Customs Service (NCS) Oyo/Osun command has allegedly shot a member of the proscribed National Union of Road Transport Workers (NURTW) in Oyo State.

DAILY POST gathered on Saturday that the incident occurred at Moniya park in Iseyin town, one of the towns in Oyo State, Friday evening.

It was learnt that the officer shot the executive member of the proscribed NURTW, identified as Mr. Lateef Aboki at the Moniya park in Iseyin.

Shittu said, “I was called around 4pm that some customs officers in mufti chased a vehicle which they believed was carrying a bag of rice to our park and in the process, hit one of our buses.

They were asked to identify themselves as they wore no uniform and were in a private Lexus Jeep and instead of doing that, they started shooting, unfortunately one of the bullets hit one of my executive members, named Lateef Aboki in the chest.

We thank God that he is responding to treatment and we also call on the authority to warn the Nigerian Customs officers to apply decorum and professionalism when doing their job.

“The vehicle they chased did not carry any rice when they eventually searched it, why chasing vehicles with private vehicle and in mufti? Do they even need to chase vehicles in the town and be shooting when they know there are many people walking by or those unknowingly driving by”.

However, all efforts made by FASTLOADED to get reaction of the Public Relations Officer (PRO) of the Oyo/Osun Command of the NIS, Mr. Abdullah Lagos proved to be abortive as several calls made through his telephone lines were not answered.

Similarly, an SMS sent to Mr. Lagos by DAILY POST reporter, asking him for reaction has not been replied as of the time of filing this report on Saturday.