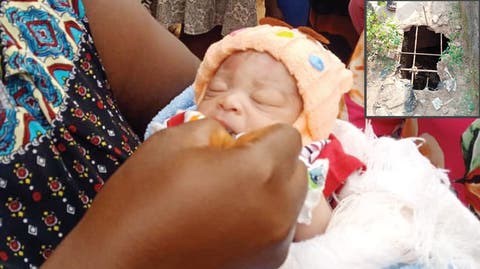 An abandoned newborn was rescued on Saturday after he was dumped in a soakaway on Oyo Avenue, Olorin community in Adiyan, Ogun State.

It was learnt that the baby was passed through a hollow space in-between the iron bars on the soakaway cover.

FASTLOADED learnt children playing around the soakaway around 3.30pm heard the baby crying and went to inform a woman that a cock had fallen into the pit.

On getting to the spot, the woman observed it was the cry of a baby and raised the alarm which attracted the traditional ruler of the community and many residents to the scene.

While efforts were being made to rescue the boy, the incident was  reported at the Agbado Police Station and a team led by the Divisional Police Station, SP Kuranga Yero and the Area Commander, ACP Monday Agbonika visited the scene.

The secretary of a community development association in the area, Mr Adeleke Adedeji, told our correspondent that a welder helped to cut the irons covering the soakaway and the baby was brought out.

He said, “Some children were playing around that soak away when they heard some sounds. They went to tell a mother that a cock was crowing inside the soakaway. That place is usually deserted because the owner only comes around once in a while. On getting there, the woman discovered that it was the cry of a baby.

“Baale (traditional ruler) and I went to the Agbado Police Station to report the case and the DPO and a policewoman followed us. Someone assisted in cutting the iron bars on the soak away and the baby was brought out alive.”

Adedeji stated that the baby had been taken to the Oke Aro Health Centre for medical care, adding that the chairman, Ifo Local Government Area, visited the baby at the hospital.

He is in a good condition. If not for the children playing around that soakaway, the baby would have died,” he added.

A senior officer, who confirmed the incident to FASTLOADED, said people were amazed the baby survived.

The officer stated, “From all indications, he is a day-old baby. His belly button is still fresh. He is currently being attended to at the health centre.”