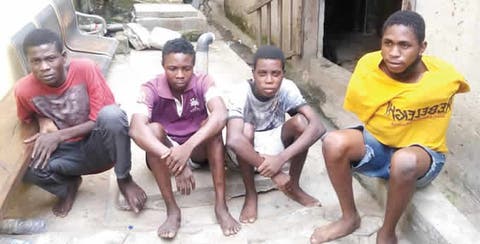 Operatives of the Special Anti-Robbery Squad, Lagos State Police Command, have arrested four hoodlums at the Mayfair Gardens, Awoyaya, in the Ibeju-Lekki area of the state.

It was gathered that the police recovered a locally-made pistol and four unexpended cartridges from the suspects, identified as Rasheed Odetola, John Zion, Damilare Salami and Adeboye Dayo.

FASTLOADED learnt that the men were arrested after a fight broke out between them and some motorcyclists, who came from the Northern part of the country.

In the course of the scuffle, a member of the gang reportedly stole the phone of one of the motorcyclists, which was discovered.

The police were called in and investigation led to the recovery of the gun.

The gang leader, Odetola, in a chat with our correspondent, claimed that they were land grabbers.

He said, “I can’t say what caused the fight between my boys and the Hausa motorcyclists. I only saw three of them beating one of us and we cannot fold our arms and allow them to beat him. That was why we supported him in fighting the Hausa boys. After we had been separated by some elders in the community, one of the Hausa boys raised the alarm that his phone had been stolen.

The Hausa boys ran towards where we were standing, surrounded us and collected our phones and money. Unfortunately, after searching us, the Tecno phone they were looking for was recovered from one of us, so they started beating us again and raised the alarm that we were armed robbers.

“We were later taken to the Elemoro Police Station at Ajah. While at the station, we were searched and a locally-made gun was found on us. We are not armed robbers; we are land grabbers and we use the gun to protect ourselves against our rivals.”

Zion claimed that he found the phone on the floor.

He said, “I am a commercial motorcyclist and was invited to a construction site by Rasheed (Odetola). He had informed us that some people were coming to fight us at the site and during the fight, I saw a phone on the floor and I picked it; I hid it in my pocket. We are not armed robbers.”

Adeboye said that he was separating the fight between his friends and the motorcyclists when he was stabbed.

He said, “I was at home relaxing when my friends came to my house around 8pm, saying that they were chased out from a site and after staying with me for two hours, they decided to leave. While I was seeing them off to the bus stop, a fight broke out between one of us and the Hausa boys in the area.

“In the process of separating the fight, one of the Hausa boys stabbed me and Rasheed and I left the scene, only for the police to arrest me.”