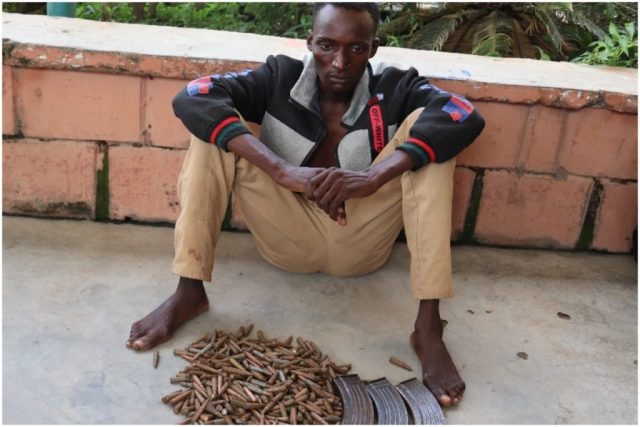 The state Police Public Relations Officer, PPRO, ASP. Wasiu Abiodun at the Commands’ Headquarters in Minna, said the suspects were arrested based on a tip-off from members of the public.

Abubakar Adamu age 35yrs of Kuspa area in Suleja was a member of a gang of armed robbery and kidnapping who conveyed arms and ammunition for the group.

He revealed that the suspect was nabbed while driving a red Honda Civic Car with Reg. NO. AY 280 KTN, with 375 rounds of AK-47 live ammunition and 7 AK-47 magazines in Suleja during a stop and search action by the Police.

According to him, during interrogation, “Abubakar confessed to being a member of an armed robbery/kidnapping syndicate, who specializes in transporting arms and ammunition for the syndicate.”

Also, he revealed that two persons were caught in connection with the kidnapping of a woman in Kuchi village, Sarkin-Pawa in Munya council when about six unidentified gunmen invaded the area.

The suspects, who confessed to being a member of a six-man gang include Aliyu Bangaje age 30yrs, Yusuf Maikoma age 28yrs both of Mararaba Dandaudu and Injita villages in Munya LGA.

While the victim was rescued unhurt, items recovered from them include two locally made shotguns, knife and cutlass, he disclosed.

ASP Abiodun further stated that one Onuwa Stephen age 37yrs of Benin, Edo State was arrested at Obasanjo Shopping Complex Minna while he was about to purchase a large number of Phones with another person’s ATM card.

“The suspect confessed to have loitered around the premises of a Commercial Bank in Minna where he spied some customers at the ATM gallery; he was able to retrieve a customer’s ATM card from the machine and accessed the account.”

He disclosed that the suspects would be charged to court as soon as investigations were concluded, while efforts are ongoing.to arrest those at large.

Urging members of the public to always give useful information to security agencies for prompt intervention, the police PRO added that under the leadership of CP Adamu Usman, the Command will continue to do the needful towards ensuring a secured and safe environment for the people of the state.