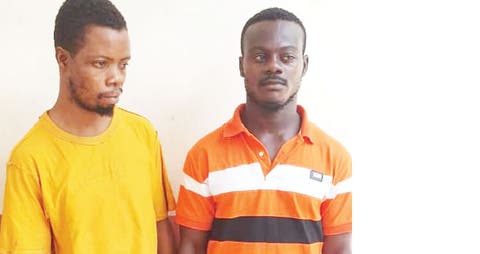 Operatives of the Special Anti-Robbery Squad of the Imo State Police Command have arrested two fleeing members of the gang that allegedly kidnapped returnees from the United States of America in December 2019.

The state Commissioner of Police, Isaac Akinmoyede, told journalists that the suspects, Favour Uwalaka, 28; and Henry Ajakwara, 36, were arrested after they engaged the police in a gun duel.

He said, “It will be recalled that in a kidnap incident around Concorde Hotel area in Owerri in December 2019, where three American returnees were robbed and kidnapped, four members of the gang were arrested, while others fled.

“On June 19, on Eliozu Road, Obiakpor Local Government Area of Rivers State, operatives of the command’s SARS, upon discreet investigation, arrested one Favour Uwalaka, aka Sympathy, 28, of Asa community; and Henry Ajawara, 36, of Awara community, both in Ohaji/Egbema LGA of Imo State.

“In the course of their arrest, the gang engaged the operatives in a gun duel, but they were arrested with bullet wounds.

“They have confessed to the crime, stating that they wore military camouflage for the operation.

“They further confessed that while Ajawara carried an AK-47 rifle during the operation, Uwalaka provided detention facilities for the victims.

“It is important to state that Favour Uwalaka wears female pants for protection based on the directive of their native doctor.”

He noted that the suspects would be prosecuted at the end of investigation.