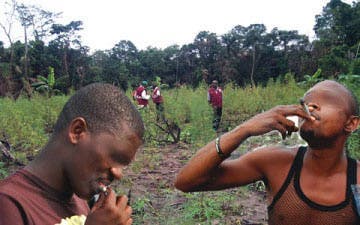 A gang of 16 suspected drug peddlers in the Gangare community of Jos North local government area of Plateau State have been nabbed with one of them in possession of an identity card belonging to the Nigerian Army, a state-based security outfit, Operation Rainbow disclosed.

Operatives of the Security Outfit, Operation Rainbow raided the premises of a public school in the area which has been turned to a drug haven and the raid led to the arrest of 16 persons said to be involved in the illicit drug business each evening.

A personnel of the outfit, Ajik Azi led the team which arrested the suspects and Permanent Secretary, Cabinet and Special Services, Cornelius Shiolbial who oversees the  outfit said Operation Rainbow will continue to partner communities to rid the State of such acts and regretted that youths have taken to drug business endangering their lives and that of others stressing the outfit has been repositioned in terms of collaboration with sister agencies for the overall safety of citizens and called on all to avail the Security Outfit of information at all times.

It has been reported the illicit drug market operates daily within the facilities of GSS Gangare, attracting buyers and sellers from other parts of the city thereby posing threats to lives and property of innocent citizens around Gangare and environs.

DSP Ajik Ezekiel Azi who led the operation with support of the Neighborhood Watch and Vigilante Group of Nigeria said they acted on credible information that daily within the hours of 6-9pm, drug and other related activities take place within the GSS Gangare premises which has become a sort of a market patronized by those on foot, motorcycles and even cars.

While parading them at the Headquarters of Operation Rainbow in Jos, DSP Ajik said their details have been taken and liaison is ongoing to transfer them to relevant authorities who will carry on further investigations, disclosing that among the 16 arrested, one was found with an ID Card belonging to the Nigerian Army and the bearer claims he was a dismissed and now recalled soldier who once served in Borno State.

The suspects were paraded with drugs seized and motorcycles used, 15 of them have been handed over the National Drug Law Enforcement Agency while the suspect arrested with Military identity card has been handed over to the Department of State Services for further investigation.