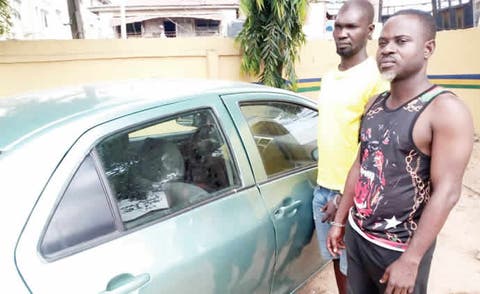 A security guard, Lawrence Ajigboye, has been arrested by men of the Lagos State Police Command for allegedly shooting a car owner, Obasi Ogbonaya, in the thigh around the Energy filling station in the Irawo area on the Ikorodu Road.

FASTLOADED TEAM gathered that Obasi parked his Honda Pilot SUV in front of the filling station and left to do something in the area but when he returned, he discovered that one of the tyres had been deflated.

Annoyed by the development, Obasi reportedly asked the people around for who deflated his tyre and approached Lawrence, a senior security guard in the area, to get an answer.

The encounter, however, took another dimension when Lawrence suddenly brought out his rifle and allegedly shot Obasi in his right thigh.

Obasi was immediately rushed to a nearby hospital good Samaritans in the area.

A source told our TEAM that the Owode-Onirin Police Division was contacted and policemen, who were mobilised to the scene of the incident, apprehended Lawrence and recovered the gun he used in perpetrating the crime from him.

When contacted, the state Police Public Relations Officer, Bala Elkana, said the case had been transferred to the State Criminal Investigation and Intelligence Department for further investigation.

He stated that the victim was demanding to know the person who deflated the tyre of his vehicle when the suspect shot him in the thigh, adding that the victim reported the incident after being treated in hospital.

Elkana stated, “On July 25, 2020, around 1.30pm, one Obasi Ogbonaya, 33, of No. 16 Ogedengbe Street, off Kukoyi Church Street, Alapere, Ketu, reported at the station that around 1pm, he parked his Honda Pilot SUV with number plate SMK 321 EV in front of the Energy filling station, Irawo bus stop, Ikorodu, and left.

When he returned, he was asking the security guard, one Lawrence Ajigboye, about the vehicle’s tyre that was deflated. Suddenly, the security guard shot him in his right thigh and he sustained an injury. He was immediately rushed to a hospital for medical treatment.

The suspect was arrested and a double-barrelled gun with two cartridges was recovered to the station. The case has been transferred to the SCIID, Panti, for further investigation.”

In another development, two suspected hoodlums, Joseph Osajiokweh and Gbenga Samson, have been arrested by the police for allegedly stealing a Toyota Yaris saloon car on the Ikorodu Road.

FASTLOADED TEAM gathered that the driver of the vehicle was heading for the Yaba area of the state when Joseph, Gbenga, and two others waylaid him at gunpoint.

After successfully dispossessing the driver of the car, the suspects drove away in the vehicle.

However, while Joseph and Gbenga were searching for a buyer for the stolen vehicle in the Mushin area, a source, who suspected that the vehicle was stolen, alerted the police, who mobilised to arrest them.

Elkana said the suspects would be transferred to the Special Anti-Robbery Squad at the command’s headquarters.

He stated, “On August 15, 2020, around 4pm, upon intelligent gathering that some men suspected to be hoodlums brought one green Toyota Yaris saloon car with number plate LSR 445 CK for sale on Isolo Road, Mushin, on suspicion that the vehicle was stolen or unlawfully obtained, the police were alerted and we mobilised our men, who rounded up the men before they could escape.

The vehicle was recovered to the station for necessary action and preliminary investigation revealed that the vehicle was snatched at gunpoint by four armed men along Ikorodu Road inward Yaba. The number plate and colour of the vehicle remain intact and the two suspected armed robbers arrested are Joseph Osajiokweh, 41, and Gbenga Samson, 36. The suspected armed robbers are currently detained for onwards transfer to SARS in Ikeja for discreet investigation.”