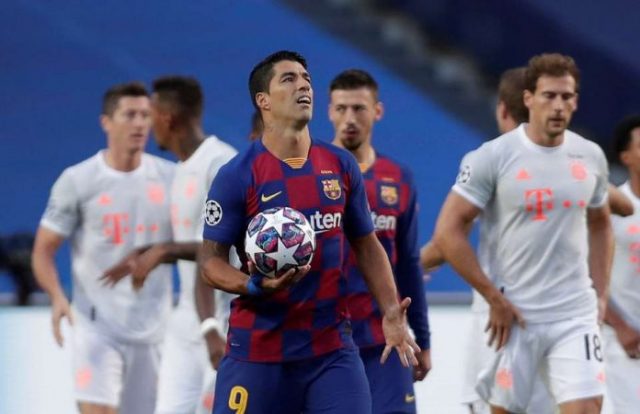 Barcelona is prepared to include Luis Suarez in the deal to sign Lautaro Martinez from Inter Milan this summer, according to report.

Martinez is seen as the heir to the Uruguayan’s throne in Catalonia at the Camp Nou with Barcelona set to overhaul the squad after their poor season-ending.

Barcelona has shown Quique Setien and Eric Abidal the exit door following the 8-2 defeat against Bayern Munich on Friday.

“Messi is untouchable and non-transferable,” Josep Maria Bartomeu said, the 57-year-old said on Tuesday. “He knows it, we all know it.

“But there are various non-transferable players like (Marc Andre) Ter Stegen, (Clement) Lenglet, (Nelson) Semedo, (Frenkie) De Jong, (Antoine) Griezmann, (Ousmane) Dembele… players we are counting on in the future.”

“We were in talks with Inter before the stop,” Bartomeu told Barca TV. “The talks were interrupted when the competitions resumed.
“We will speak with the new coach to understand his vision for the future.”

Suarez and Busquets are among the players who could leave the club while Ivan Rakitic, Arturo Vidal and Sergi Roberto are all facing uncertain futures.