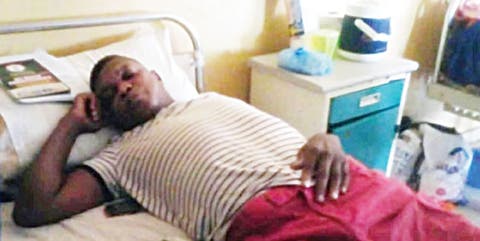 that his infected leg was as a result of an old injury he sustained during his active years, which was not properly treated.

Nwoha, who has been bedridden since September 2019, says he will require N700,000 for the surgery on his left knee.

He is currently undergoing treatment in a hospital in Umuahia.

“The pain has been worrisome and it keeps getting worse. Doctors have said if the leg isn’t operated on in less than two months, I may not be able to walk again,” Nwoha said.

“But the doctors have assured me that I will be able to walk again if the surgery is done at the right time.

“The doctors at the Federal Medical Centre in Umuahia cannot carry out the surgery, so I met with an expert, who told me that I would walk again once I had the surgery done.

“But as I talk to you, the surgery is not even the real issue but the money needed for the surgery. I have been under medication for a while now and I have exhausted all that I had with me.

For his contribution to the Eaglets’ historic feat victory in China 35 years ago, the Imo-born footballer had a road named after him in Owerri, as directed by the Federal Government.