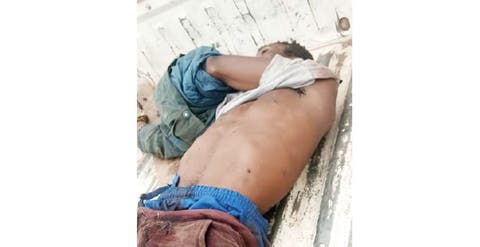 The Commissioner of Police in Ogun State, Edward Ajogun, on Tuesday disclosed that  he and his  men employed technology to smoke out  alleged serial killer and drug addict, Feyisola Dosumu, from a dungeon and  shot  him dead.

Ajogun said the command employed technology to fish out the suspect when it became difficult to apprehend him where he hid in the bush.

Dosumu, aka Spartan, had been declared wanted by the police.

He had reportedly killed no fewer than seven people in Ogere and Iperu-Remo, in the Ikenne Local Government Area of Ogun State.

The suspect was shot dead by joint security forces in Ogere on Tuesday.

Ajogun explained that the suspect was killed in his dungeon built in the bush in the Ogere area, after two days operations.

He said, “We employed the reactive means of always combing the bush each time this thing happens. He started this in April, then on August 21, he killed another victim.

“Yesterday (Monday), we almost arrested him, but he slipped through our fingers.  I felt it was important to employ technology. So, we contacted   our technical platform in Abuja, which provided us assistance.

Today (Tuesday), we were able to have a pin-point location where he was hiding and we engaged him. We nailed him in the leg and it turned out to be a fatal injury.”

Earlier, Governor Dapo Abiodun  had applauded the security agency for a “job well done” and urged them to make Ogun a crime-free state.

Dosumu, a cultist and drug addict, graduated from a polytechnic in Abeokuta.