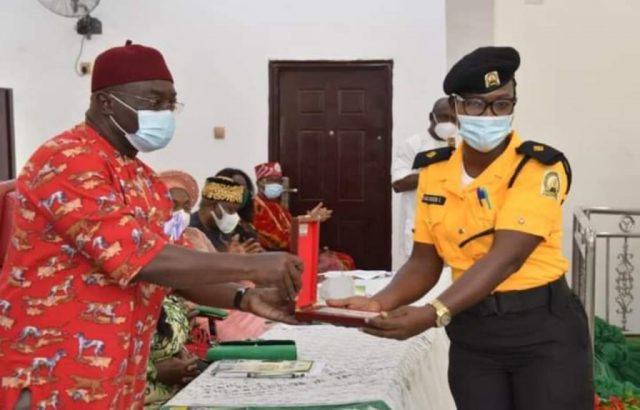 Okezie Ikpeazu, the Governor of Abia State, has assured the people of the State that his administration will continue to overcome challenges and keep the State moving in the right direction of sustainable growth and prosperity.

Governor Ikpeazu, who stated this during the grand finale of the 29th anniversary celebration of the creation of the State held at the Michael Okpara Auditorium, Umuahia, Thursday, expressed appreciation to God for the relative peace and political stability in the State.

He disclosed that his administration had worked on 200 roads and assured that before the end of his administration, he would ensure the completion of the new Government House, JAAC Secretariat, as well as deliver on a new airport.

The Governor also disclosed that a committee to midwife the airport project has already been constituted, saying that his administration has constructed 359 new classroom blocks in the State and was set to add another 150 along with the already established four model schools.

Ikpeazu expressed joy over the appreciable progress made in education, SME, agriculture and industralization, adding that the new Enyimba Automated Shoe Factory will commence full operations this year.

He said with the inauguration of the Board of Automated Shoe Factories in the State, Abia shoes would compete favourably with others in the global market.

Ikpeazu reiterated that his administration would continue to apply prudence in ensuring that available resources are managed for the good of Abia people despite the challenges posed by the outbreak of COVID-19, which created massive economic shocks across the globe.

The number one citizen of Abia State, lauded the socio-political stability in the State and appreciated the Deputy Governor, the Speaker, the Chief Judge and other key office holders for being partners in the wheel of progress of the State.

Governor Ikpeazu also paid glowing tributes to the founding fathers of the State who worked tirelessly to ensure the actualization of the creation of Abia State.

Earlier, the Chairman, Abia State Advisory Council, Ezeogo (Dr) Anagha Ezikpe, represented by the Deputy Chairman, Administration, of the Council, Chikezie Wachukwu, requested that the Charter of Equity be enacted into law by the State House of Assembly to enhance equitable sharing of political power in the State.

He, however, urged all and sundry to maintain unity in the State.

FASTLOADED reports that highlights of the 29th Anniversary of creation of Abia State were the cutting of the State’s anniversary cake and presentation of awards to 13 deserving individuals for their selfless services to the State.