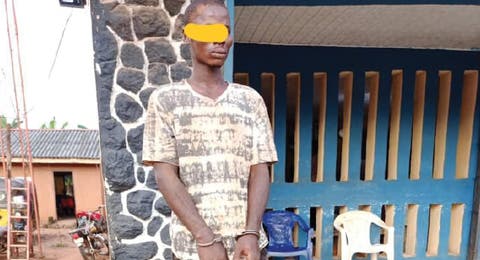 A 21-year-old man, Uchenna Chukwuma, said to be a pastor has allegedly killed a native doctor in Anambra State.

The suspect claimed he was divinely sent to kill the 60-year-old herbalist identified as Chukwudi Ugwu.

The incident happened at Nkpor, near Onitsha, in the Idemili North Local Government Area of the state.

Chukwuma claimed the herbalist had been disturbing him spiritually, thereby hindering his progress.

The Spokesperson for the police in the state, Haruna Mohammed, said the suspect confessed to the crime during interrogation.

He said,” There was a report of alleged murder of a native doctor, one Oliver Chukwudi Ugwu, 60, of Umusiome, Nkpor but hailed from Umuavor village Abor in the Udi Local Government Area of Enugu State by a self- acclaimed pastor one Uchenna Chukwuma, 21,  of Ugwuezue street, Umusiome Nkpor in the Idemili North LGA of Anambra State.

“He further alleged that the victim was disturbing him spiritually and had not allowed him to progress financially.

Police detectives attached to Ogidi Division visited the scene of the crime and rushed the victim who was found in a pool of his blood to Iyi Enu Hospital Ogidi for medical attention where he was certified dead by a medical doctor on arrival. The corpse was deposited at the hospital’s mortuary for autopsy.”

Mohammed said a machete allegedly used in perpetrating the crime was recovered as an exhibit while the case had been transferred to the State Criminal Investigation Department, Awka for discreet investigation.