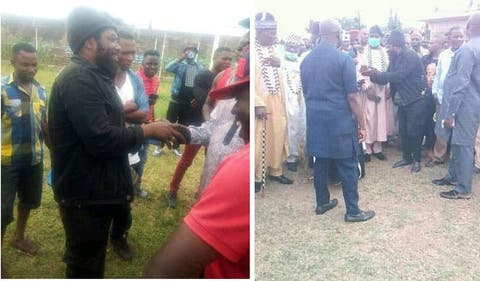 There is tension in Benue State as the state government and military authorities trade words over Tuesday’s killing of the wanted Benue militia leader, Terwase Agwaza, also known as ‘Gana’ by the military.

Agwaza, who had been on the wanted list of the government for about four years, gave himself up, Tuesday, preparatory to be granted an amnesty alongside his gang members by Governor Samuel Ortom and the State Security Council.

Governor Ortom had, Tuesday night, confirmed that several members of the criminal gang were whisked away by the military personnel, who waylaid them on the Makurdi-Gboko road, while on their way to Makurdi to renounce their membership of the criminal gang and benefit from the State Security Council’s new amnesty programme.

He observed that the incident had heightened tension and confusion in the state, adding that the Commander of the OPWS, Maj. Gen Adeyemi Yekini, confirmed to him that his men took away the wanted man and some of his gang members.

But Tuesday night, the military authorities said it recorded a major breakthrough in the fight against kidnapping, armed robbery and militia attacks in the North Central zone of the country when it finally crushed the most wanted and notorious gang leader responsible for most of the killings in Benue and Taraba states.

Speaking with journalists on Tuesday, Moundhey Ali, Commander of ‘4 special forces command’ said Gana was killed along Gbese-Makurdi road after an exchange of gunfire.

Ali said about 40 members of Gana’s gang were captured in the process.

He said: “About 12:00 hours on Tuesday, we received strategic information on the movement of the dreaded bandit Terwase Akwaza Agbadu AKA Gana along Gbese-Gboko-Makurdi road.

Troops of Operation ‘Ayem A’Kpatuma III moved swiftly and mounted roadblocks along the routes. At about 13:00 hours, there was an engagement with the convoy of Gana, a shoot out ensued and the bandit was killed.”

The commander said those arrested are in their custody and that they would be handed over to the appropriate authority for prosecution.

Ali said pump-action guns, ammunition, charms, and explosives among other items were recovered from the gang.

I demand explanation from military authorities—Ortom

However, Governor Samuel Ortom of Benue State, yesterday, demanded an explanation from military authorities, as he expressed shock and surprise over the manner of Gana’s killing.

Governor said: “I am shocked and surprised to hear that the military killed ‘Gana’ because after we learned that the military seized him yesterday (Tuesday), I called the Commander of Operation Whirl Stroke, who told me that there was an operation, promising that he would get back to me.

“But shortly after, there was a press statement from the Nigerian Army Special Forces, Operation Ayem A’ Kpatuma in Doma, saying he had been killed.

“I had to reach out to the commander, who confirmed to me that he was dead. I told him I was surprised and needed an explanation because the impression we got was that there was a shoot-out. So he assured me that he would come personally to explain to me.

I was surprised at what took place but I don’t want to join issues with security agencies but at the same time, I have the responsibility to protect lives and property.

“I must rebuild the confidence of the people. I have to appeal to Benue people, particularly Sankera people (comprising people of Ukum, Logo and Katsina-Ala LGAs) not to be deterred but remain calm until we get to the root of what took place on Tuesday.

“I believe that we shall be given an explanation and whatever there is I will let you know.

“Meanwhile the profiling of the 42 repentant militia members we granted amnesty, yesterday, is ongoing after which they would be returned home. We also gathered that five of the repentant criminals, who were taken away by the military have been released and are being brought to Makurdi.”

The governor dispelled the insinuation of betrayal on the part of those who arranged the amnesty programme that led to the arrest and killing of the wanted militia leader.

Ortom clarified that the amnesty was initiated by the Sankera leaders and accepted by the State Security Council to help end the criminality in the area, adding that it was all done in good fate adding that there was no iota of betrayal in the process.

In a statement, yesterday, in Abuja, Suswam, a former governor of the state, described the killing of Terwase after turning a new leaf from crime and criminality by soldiers as counter productive to peace already returning to the state

He said where a criminal had surrendered for a new way of life after persuation from elders and leaders in the community and later killed extra judicially by some state actors engenders the healing process as “this is time to heal and not to kill.”

Suswam’s statement read: “The events of September 8, 2020 in my senatorial district where repentant criminals, who had surrendered after extensive persuasions, were singled out and killed extra judicially leaves a sour taste and has opened a gaping wound that requires all efforts to heal.

“It is no secret that my senatorial district has been traumatised and the people terrorised by activities of criminal gangs led by Mr Terwase Agwaza alias Gana for many years.

“The consequences of this endless terrorism has been a steady decline of economic and social activities leaving a once prosperous people pauperised. Markets no longer attract traders, schools are closed and farmlands abandoned. Politics in the area has become war with an uncontrolled proliferation of dangerous weapons.

No responsible leader will idly standby and watch his community become a theatre of war and a gangster’s paradise.

“It is with this solution mindset that traditional rulers, clergy men and elders of the area decided to utilise means of constructive engagement and dialogue to ensure that youths of the area do not become tools for the destruction of that society.

“The Benue State government along with the security agencies have long desired for a return to normalcy, peace , prosperity and security of the area.

“We were all excited to see the dreaded Gana come out of hiding to the warm embrace of our traditional rulers, clergy men and political leaders at a public function at the Akume Atongo Stadium in Katsina Ala.

“While I have been consistent in condemning the reign of terror he unleashed on his community, I cannot in good conscience as a lawyer of over three decades and a senior parliamentarian accept cold blooded extra judicial murder of an unarmed person as a solution to our security problems.

“If this method is accepted as a norm in our country, there will be no need for laws and courts. We stand to benefit more by subjecting suspects to due process of the law. Information extracted from a living Gana would have helped security agents get to the root of activities of criminals.

“By this gestapo style execution, we have missed an opportunity to learn vital lessons about the structure of crime in the area.

“An independent judicial commission of inquiry will unravel facts of the matter to serve as lessons for the furure.”