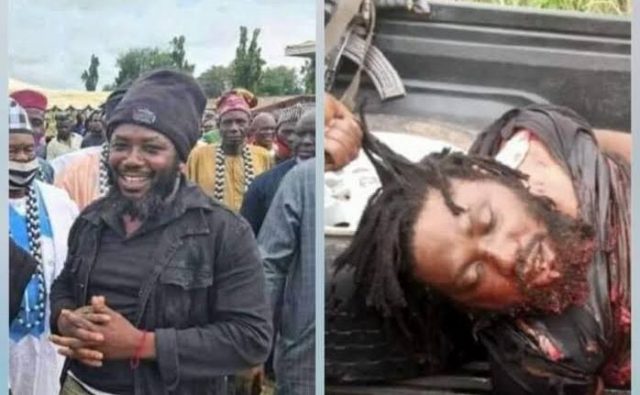 It has been revealed that militant leader, Terwase Akwaza aka Gana was dragged out of a government convoy and killed by soldiers.

More facts on Wednesday emerged about how a notorious militia leader in Benue State, Terwase Akwaza, aka Gana, was killed by the military on Tuesday despite embracing amnesty.

A community leader, who confided in one of our correspondents in Makurdi, the state capital, said Gana was in a government convoy when he was dragged out of a car by soldiers at a checkpoint in Gbitse, near Yandev roundabout in the Gboko Local Government Area of the state.

The community leader said the militia leader was thrown into a military vehicle and driven away.

The Commander of Operation Ayem A Kpatuma, Major General Ali Gadzama, had on Tuesday told Channels Television that Gana was killed in a gun battle with soldiers.

But it was gathered that the militia leader had between 11am and 2pm on Tuesday at the Katsina-Ala Stadium in the presence of prominent indigenes of the Sankera District of the state, including the First Class Chief of the area, His Royal Highness, Abu Shuluwa, embraced amnesty.

The Sankera zone consisting of Logo, Katsina-Ala and Ukum local government areas has been the worst hit by the activities of Gana and his gang since 2009.

The militia leader and others had in the state Government House in 2015 surrendered no fewer than 200 guns including AK-47 rifles.

But the peace move was thwarted after the killing of the Senior Special Assistant to the state Governor on Security, Denen Igbane, in 2016. After the incident, the militia leader went back to the bush.

The community leader, who confided in The PUNCH, said the latest peace move efforts were initiated by some prominent indigenes, who urged Gana to drop arms and embrace peace.

The source said, “He (Gana) actually came out because of the assurance given by the prominent indigenes and traditional rulers and he was not armed when he was dragged out of the car and taken away to be killed.

“The militia leader sat in-between the Chairman of the Katsina-Ala Local Government Area, Alfred Atera, and a priest in one of the cars in the government convoy.”

According to the source, the convoy was stopped by soldiers at a checkpoint in Gbitse on its way to Makurdi.

He stated, “As soon as we got to the military checkpoint, some soldiers who spotted Gana had to pull down the priest, drag Gana into their waiting vehicle and zoom off.”

Meanwhile, there were fears in the Sankera zone on Wednesday as residents thought that members of Gana’s gang could carry out attacks on the area.

A trader in Katsina-Ala, who spoke on condition of anonymity, said, “We heard that many of the repentant militias who saw what happened along the road turned back and they might likely return to the trenches.

“These people may see it as betrayal and want to unleash terror on the people in this area.”

On his part, the state Governor, Samuel Ortom, expressed shock over the arrest and killing of Gana by soldiers.

Also, a member of the House of Representatives for the Logo, Katsina-Ala and Ukum Constituency, Richard Gbande, expressed concern about the killing of Gana.

Gbande said what transpired on Tuesday amounted to betrayal of trust on the side of the people of Sankera.

He stated, “The whole thing was like betrayal of trust because the whole traditional rulers in the area were the ones who mediated and made it possible for him (Gana) to embrace the amnesty.