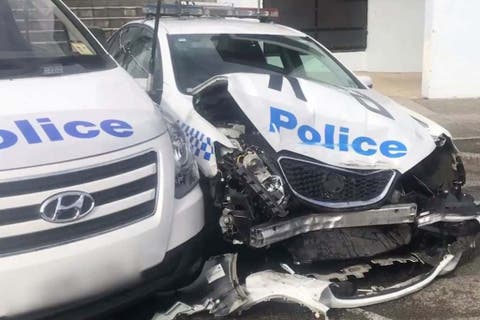 An Australian drug courier was caught with 600 pounds of methamphetamine after he rammed his transport van into two cop cars — and has now been sentenced to more than six years in prison, reports said.

Simon Tu, 28, was driving a Toyota HiAce with the $145 million in drugs in July 2019 when he plowed into two patrol cars parked right outside the Eastwood town police station, the Sydney Morning Herald reported.

He fled, but police caught up with him about an hour later. When cops searched Tu’s van, they found multiple cardboard boxes stuffed with crystal meth.

This would be one of the easiest drugs busts that NSW Police has ever made — incredible, absolutely incredible,” Detective Glyn Baker of the Ryde Police said, according to CNN affiliate Seven News.

Tu will be eligible for parole in July 2023. During a hearing this week, Tu’s lawyer, Phillip Boulten, described his client’s actions as “negligent and shambolic,” according to the news outlet.

His driving is what gave it all away, and his role was to drive, so that in some sense it was a hopeless execution of the task he was asked to perform,” Boulten said.

Tu has refused to confess to police where the drugs came from or who told him to pick them up.