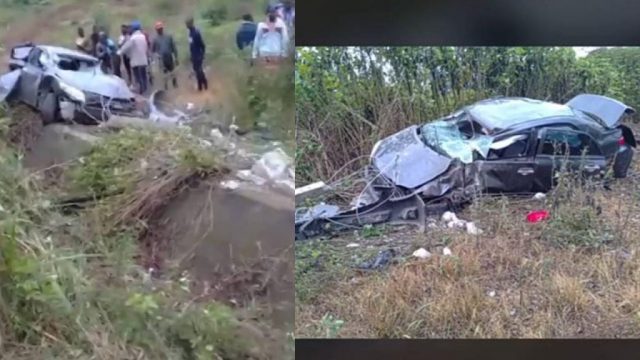 There is palpable tension in Osogbo as men of Osun Joint Task Force allegedly chased a suspected Yahoo boy to death in the state.

It was gathered that the suspected Yahoo boy, identified as Remi and three others engaged in an accident while being chased by the men of Joint Task Force on Tuesday evening in Osogbo.

The accident occurred at the East bypass when the Toyota Corolla with registration number KUJ-553LY Abuja – conveying the suspected Yahoo boys veered off the road during the chase and hit electricity poll.

According to a source, three persons have been rushed to the hospital why the other died on the spot.

Sources told Fastloaded that the Joint Task Force was shooting sporadically into the air to be able to escape being mobbed.

Meanwhile, angry youths have been protesting the death of the Remi and carried the corpse to the entrance of the State Governor’s House in Oke-fia. They also damaged a vehicle of the Nigeria Police at Oke-fia.

Amidst rising tension, the Spokesperson of the police in Osun, Yemisi Opalola confirmed the incident added that the force is on top of the matter.