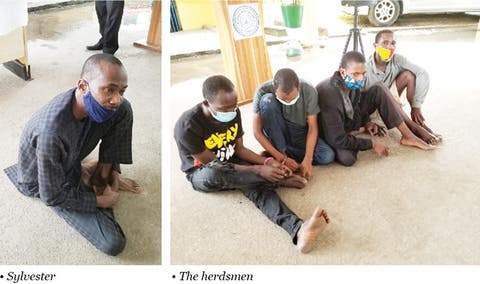 The Assistant Inspector-General of Police, Zone 2 Command, Ahmed Iliyasu, on Wednesday, paraded six suspected herdsmen allegedly responsible for multiple kidnapping and killing of a yet-to-be-identified driver during an attempt to abduct a police inspector on the Ayetoro-Abeokuta Expressway in the Yewa area of Ogun State.

Iliyasu said during a press briefing at the command headquarters, Onikan, Lagos, that the driver was conveying a woman when he suddenly realised that an ambush had been laid by the herdsmen, but while attempting to escape, one of the suspects shot him dead.

He said, “These criminals mounted a roadblock on the Ayetoro-Abeokuta Road in Yewa, during which a police inspector ran into them. While they were manhandling her, the driver of a car coming behind attempted to escape their onslaught, but they opened fire on him and he died.

“Thereafter, the other female occupant of the vehicle was kidnapped alongside the female inspector, taken into a forest for three days before they were released after the payment of ransom by their relatives.”

Fastloaded gathered that the same syndicate was responsible for the abduction of an official of the Nigeria Security and Civil Defence Corps, and a businessman, identified simply as Alhaji Umar, and the killing of a cattle herder, simply known as Alhaji Oro.

While the family of the NSCDC official was said to have parted with N3m to secure his release, Oro was unlucky as the AIG said, “Despite the payment of the N4m demanded as ransom, these men shot and killed him.

“These men traced another target, identified as Umaru, to Awaiye in Oyo State, ambushed him on his way to the farm and held him captive for two days until he was able to meet the kidnappers’ demand of N1m.”

One of the suspects, Saliu, said, “I was arrested because we went to kidnap one Alhaji Umar. We went to abduct him because we knew that he had money and we collected N1m ransom from him. We also planned the kidnap of one Alhaji Oro, while we were in prison, and shot him dead after his family had paid N4m ransom.”

In another development, a suspected fraudster, Sylvester Ehiarinmian, was also paraded for allegedly defrauding a yet-to-be-identified lady based in United States of America.

Iliyasu said the lady had a vision of setting up a business in Nigeria and hired Sylvester to provide security for her, adding that the suspect took advantage of the situation to defraud the victim.

He said, “Sylvester made a love advance to her despite being married with children, and promised to marry her. Naively, the lady entered the fraudulent net of the suspect and was defrauded neatly. When she came to her senses, the lady forwarded a petition to my office and I instructed the Zonal Tactical/Monitoring Unit to go after the suspect from whom four Sienna vehicles, a Toyota Highlander SUV and landed property, comprising a storey building, an undeveloped plot of land, both in the Apo area of Abuja, and another two plots in the Wasa area of Abuja, all belonging to the victim, were recovered.

Yet to be recovered from him are a Mikano generator, two duplexes in South Africa, the sum of $15,000 he fraudulently obtained from her to procure visa for the victim’s sister, another $10,000 he proposed to purchase carpets for an office they both agreed to operate and N40m for the establishment of a medical laboratory.”