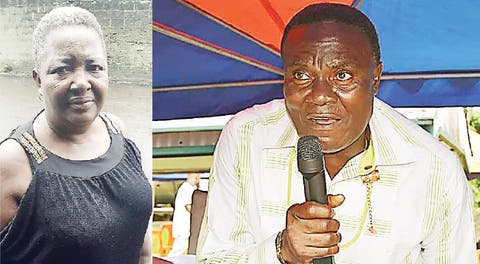 Your husband was recently kidnapped and was released, how did he die?

My husband’s name is Sokari Gospel Braide. On Saturday, August 8, 2020, I was not feeling well and I decided to go and buy some drugs. But on getting back home, I started hearing gunshots and saw people running helter-skelter. I ran too towards my house and heard some people asking my husband: ‘Where is your wife? Where is the money?’ He said which money. They went into my room, took my plasma TV, some clothes, mobile phones and other valuables. They broke into my husband’s barbershop and collected the mobile phones some people were charging there because there was no power supply. They asked my last child where his mother was and he said he didn’t know. They replied in pidgin English, saying ‘you don reach to die’ (you are old enough to die). They shot in his direction but he quickly dodged and the bullet went into our room and destroyed our refrigerator. Then they took my husband away with them.

How many of them were the assailants?

They were four in number and all of them were armed with long guns. My husband was shouting ‘what did I do’ while he was being dragged away. My children and I were crying because we didn’t know what to do. That evening, the kidnappers called me and said I must bring N20m for them to release my husband. I told them I didn’t have that kind of money. They started insulting me and calling me names – useless woman, idiot, and so on. They said if you don’t have money, get out. I begged them to release my husband because he was not troublesome.

Anytime I called their number, it would not be available but they could reach me on my phone. Later, they called again and said I should bring N15m to get my husband. They called one of my sons and told him they would kill him.

I told them I wanted to hear my husband’s voice. When my husband spoke, he was crying and saying ‘they want to kill me, they are killing me’. He told me to look for money to give to them so that they would release him. I begged them that all I had was N1.2m, they rejected it. Then they brought the ransom down from N15m, and then to N10m. Then they asked me to get N5m and later, they said I should come with what I had. On August 18, I took the N1.2m and went with brother-in-law and a man who said he knew where they were calling from.

We took a taxi to Andoni Local Government Area. Where they told us to come was under a bridge between Andoni and Ogoni. The man gave them the money and asked for my husband and they told him he would be released around 3am. We waited till after 5am on Wednesday (August 19); that was when they brought him to that bridge. He was in a boat, saying ‘see what they did to me’. I could not speak when I saw my husband. They blindfolded him, tied his hands behind his back and tied his two legs too. When they saw me, they dragged him out of the boat and dragged him inside the mud to where I was.

When I saw my husband, I cried. I cried and up till now, I am still crying because of how badly he had been beaten. Even thieves are not beaten like that (sobs intermittently). He was very weak so we took him straight to hospital in Port Harcourt because I didn’t like the way he looked. I used a handkerchief to bring out a black substance from his mouth and his nose. When I showed it to the doctor, he said it could be as a result of the drugs they gave which they might be taking in the creek. They gave him oxygen and other things immediately but he died the following day.

How did you feel when you saw your husband tied like that and with a blindfold?

I fainted. I didn’t believe it. They poured me with some water before I woke up. The sight was not something that was good to look at. There were bruises all over his body.

Some suspects were paraded at the police command in Port Harcourt, was any of the suspects known to you?

Yes, I know all the four of them (suspects). I knew them even before the incident. One of them is my husband’s in-law. I never knew he had that kind of plan.

Did your husband tell you anything before he died?

No, he could not even talk well. He was struggling to breathe. He was too weak.

How old was he?

He was 65 years old. He worked as a civil servant and was a pensioner at the time he died. The last place he worked was Andoni Local Government Area in the state.

How many children do you have with him?

We have eight children. He had four with me and four outside – two boys and six girls.

How difficult has it been for you to cope since he died?

What kind of person was your husband?

He was a gentleman. We lived well together. I did not have any problem with him and he had respect for people. He was a Christian and a member of Salvation Ministries.

Now that your husband’s suspected kidnappers and killers have been arrested, what is your wish?

Well, I want the government to get justice for me. They should not release them because they have killed somebody. When I remember what they did to him, I always cry. The police and government should see how my children and I cry and make sure we get justice. That is what I tell God now.