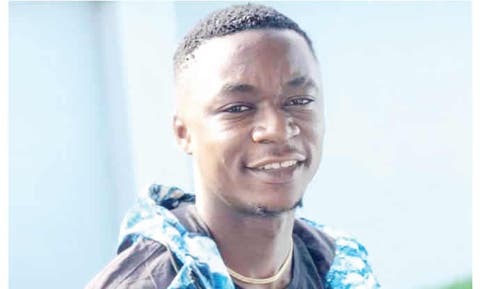 Angry youths have taken to the streets to protest the death of a musician, Daniel Chibuike, aka Sleek, who was allegedly shot dead by a policeman in the Elelenwo area of Port Harcourt, Rivers State.

Fastloaded gathered that Daniel and his friend, identified simply as Reuben, were waiting outside a hotel for the driver of a car-hailing company to convey them to a destination in the state when they suddenly sighted men of the Special Anti-Robbery Squad advancing in their direction.

Out of fear of being arrested, it was learnt that Daniel and Reuben took to their heels but in a bid to apprehend them, the SARS operatives labelled the duo as thieves.

Daniel and Reuben, while fleeing from the policemen, reportedly passed through De Topic Supermarket, where a riot policeman allegedly shot the 20-year-old musician.

The bullet penetrated Daniel’s body and he fell to the ground close to the supermarket and was in a pool of his own blood.

Footage of the tragic incident posted on Twitter by one Wisdom Echefula showed a man suspected to be Daniel lying unconsciously on the road as some armed policemen were also seen dragging another man suspected to be Reuben at the scene of the incident.

The post read in part, “Sleek and his friend Reuben came out from the hotel dey lodge to wait for there bolt man then suddenly sars men came and strted chasing them they ran into market and passed to the junction (de young junction) the sars men began shouting thief thief they ran pass a supermarket and that supermarket also got sars men too then they shot sleek till he died.”

Another post on Instablog9ja alleged that the policemen shunned several pleas by Reuben to rush Daniel to hospital, adding that he was left for dead at the scene of the incident.

The post read in part, “The SARS operatives started screaming and calling them (Daniel and Reuben) thieves, which made the Mopol guarding De Topic Supermarket to fire a direct shot at Sleek (Daniel).

“He didn’t die instantly. His friend kept begging and pleading with them to rush him to the hospital but they refused and asked him to shut up. They left him to die in the pool of his blood in front of the supermarket.

They later took both Sleek and Reuben to Miniokoro police station where they later transferred Reuben to the state CID, then the commander after hearing what really happened from Reuben, ordered them to detain all the SARS operatives involved.

“An eyewitness call my mom to inform her of what happened. My mom went to the DPO’s office at Akpajo, Elelenwo and he said they shot him in the leg, that it was a mistake.

He said they rushed him to hospital, and asked us to go and check, but on getting there, we found out that he was already dead and in the mortuary. The DPO later asked us to leave his office and even threatened to detain my mom.”

Footage attached to the Instablog post showed angry youths, including friends of the deceased, protesting the circumstances surrounding the death of the musician and also called for the end of SARS.

When contacted, the state Police Public Relations Officer, Omoni Nnamdi, “SARS operatives were not involved in that matter. What happened was that men of the Anti-Kidnapping Unit were responding to a distress call when, unfortunately, a riot policeman from Jigawa State shot and killed the man.

The riot policeman and the personnel of the Anti-Kidnapping Unit involved in the incident have been detained at the State Criminal Investigation and Intelligence Department, where they are being interrogated.”