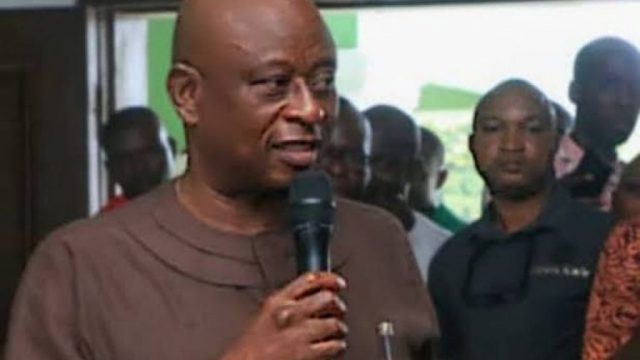 Former Minister of Education (State), Olorogun Kenneth Gbagi, on Saturday, reacted to the report that four staff of Signatious Hotel, who were allegedly stripped naked, photographed, arrested and dragged before a Magistrate Court in Effurun, Uvwie Local Government Area of Delta State over missing money.

Gbagi, who is gunning for the governorship position in Delta State, spoke at a press conference held in his Oginibo country home in Ughelli South Local Government Area.

He denied any involvement in the act, which has been widely condemned by the members of the public especially the human rights community.

Gbagi also said none of his children had a hand in the act, which he claimed were politically motivated.

The politician, who doubles as the Chief Executive Officer of the hotel, noted that there was no warrant for his arrest from the Inspector-General of Police to him concerning the incident.

While pointing out that he was at the burial ceremony of his late elder Sister, Mrs. Doris Gbagi Emareyor, Gbagi said he was never arrested by any team of policemen from Abuja.

He, however, promised to honour the invitation of the IGP if he is invited for questioning over the incident.

It was widely reported on Friday that the Inspector-General of Police had issued a warrant for the arrest of Chief Gbagi over his alleged involvement in the incident after the police raided the hotel and arrested two staff.