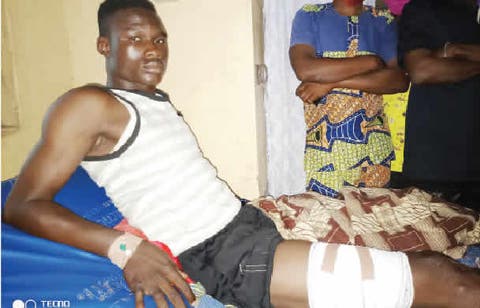 A fashion designer, Gbadebo Sodiq, who is admitted to Ladoke Akintola University of Technology Teaching Hospital in Ogbomoso, Oyo State, tells OLUFEMI OLANIYI how he was shot by police on October 11

What is your name?

My name is Gbadebo Sodiq. I am 22 years old.

Why were you admitted in hospital?

Who shot you and what did you do?

I was shot by the police. I did not do anything.

Were you part of the #EndSARS protests?

No, I was not part of the protest. I am a fashion designer.

Where were you shot and when did it happen?

I was shot last Sunday. I heard that a young boy (Lekan) was shot by the police and there was nobody to rescue him. I went to the scene to rescue him.

Did you go there with a motorcycle or how did you intend to take him to hospital?

I just went there to help him. I knew if I carried him away from the scene, I might help save his life. I did not go there with a bike. I am not an okada rider.

Which part of the town did it happen?

He was shot in the Owode area, close to the police station there. I live in that area as well.

Was the boy you wanted to rescue part of the protest?

I don’t think so. I heard that he was coming from church and I believe he was hit by a stray bullet. The boy is even the one few beds away from mine. I was not part of the protest in any way. I was moved to help him because Lekan is a younger brother to my friend. I went to the scene to rescue him and immediately I bent down, I was shot. That was how we were all brought to the hospital (LAUTECH Teaching Hospital, Ogbomoso).

Is the government responsible for your hospital bills or who is paying the bills?

My mummy is the one paying and she has been borrowing from friends and relatives to pay.

What work does your mother do?

She is a hawker. I want government to help me. I know my mummy is struggling and my fashion business is also not thriving yet. The coronavirus pandemic has also not helped matters. There is no help anywhere. We have been working just to stay alive but with this now, her business has been badly affected and I just pray to be able to walk well and use my right leg where the bulletin hit me.

Governor Seyi Makinde came to Ogbomoso on Tuesday. Did he not come here to see the victims of the violence?

No, he did not come here. I think he did not know that some of us are here. I learnt that he visited those admitted at Bowen University Teaching Hospital. I know he would have helped us if he knew.

Have you ever been harassed or extorted by police before?

No. I don’t do anything that violates the law and I have not been arrested or harassed by the police. I was never part of the protest. I was just trying to help when the bullet hit me.