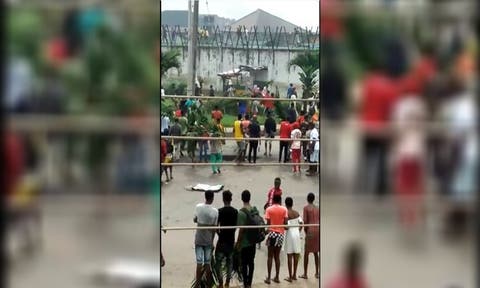 The Edo State Government says the Nigerian Correctional Service is yet to confirm the number of inmates that escaped in Monday’s jail-breaks in the state.

The government also urged resident to obey the 24-hour curfew imposed on the state to forestall the breakdown of law and order.

Hoodlums had attacked two custodial centres in Benin and Oko on Monday and had freed inmates in the facilities.

In a statement signed on Tuesday by Crusoe Osagie, Special Adviser on Media and Communication Strategy to Governor Godwin Obaseki, the government said investigations were on to bring perpetrators to book.

The statement read, “The authorities are yet to confirm the total number of inmates released to the streets, as investigations are still ongoing, which necessitate the shutdown in the state.

The Edo State Government has said that the 24-hour curfew imposed in the state on October 19, 2020 subsists and is active till further notice. As such, everyone is expected to remain indoors.

Security agencies have been deployed in the streets to ensure full compliance and anyone found contravening the directive will be dealt with according to the law.

“Parents and guardians are urged to restrain their children, wards and youths from flouting the order, as security agencies will not spare any errant individual.”