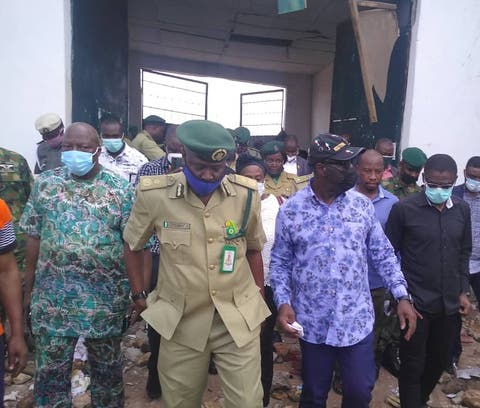 Edo State Governor, Godwin Obaseki, has issued a 48-hour ultimatum to fleeing inmates from the Medium Security Correctional Centres on Sapele Road and at Oko, Airport Road, to return to the prisons.

Some hoodlums had hijacked the #EndSARS protests against police brutality and extrajudicial killings earlier in the week.

The rampaging hoodlums had attacked the two prisons and freed about 2,000 inmates.

But while inspecting the two vandalised correctional facilities on Wednesday, Obaseki said the freed inmates must return before Friday, October 23, 2020.

In a statement signed on Wednesday by Crusoe Osagie, Special Adviser on Media and Communication Strategy to the governor, Obaseki said the level of destruction in the state was never in the spirit of the #ENDSARS protests but the action of criminal elements who have now caused unrest in the state.

It quoted Obaseki as saying, “This is not in the spirit of #ENDSARS protests. The protesters were focused on reforming the police system not to destroy prisons and release inmates. You can tell that there was some criminal intention behind these acts.

We condemn the act wholeheartedly and even the #ENDSARS protesters have joined us in condemning this act. Government can’t sit down, fold its hands and allow a breakdown of law and order in our society because everyone will be affected.

We know some of the inmates have been released but we appeal to all inmates who have escaped to come back on their own before the close of business on Friday. They should report themselves back as nothing will be done to them but failure to do that, we will come after them as we have their records.”

“Controller of Correctional Services in the state, Babayo Maisanda, who took the governor and top security agencies round the damaged custodial centers, said the total number of escapees is 1818,” the statement added.