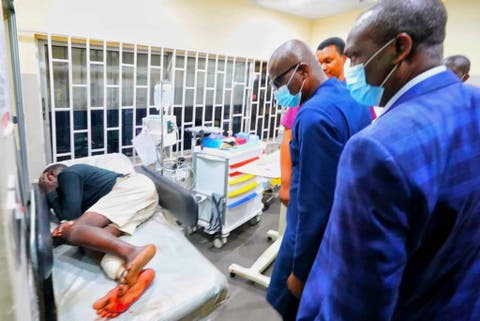 He was at some of the hospitals where #EndSARS protesters rushed their injured after they were attacked by security forces.

With Sanwo-Olu on the visit was the deputy governor, Obafemi Hamzat, and other state officials.

Sanwo-Olu and Hamzat with some wounded protesters

Giving an update, the governor said, “I’ve just concluded visits to hospitals with victims of this unfortunate shooting incident at Lekki.

“It has taken me this long to make a statement because I have to prioritize the welfare of the victims of this very sad incident.

“There are currently 10 patients at the Gen Hospital, 11 at Reddington and 4 at Vedic; with mild to moderate levels of injuries while 2 are receiving intensive medical care. 3 patients have been discharged & we will continue to monitor and ensure all patients get the best care.”

Many hospitals in the area were said to have been treating wounded protesters for free since the attack.

Tragedy struck when security operatives, in a bid to disperse #EndSARS protesters, reportedly opened fire on the teeming youths at the Lekki tollgate around 7pm.

#EndSARS protesters have been demonstrating against police brutality and extrajudicial killings at the Lekki tollgate for about two weeks.

Similar demonstrations have been staged in different parts of the state and the country.

Tuesday night attack has been condemned locally and internationally.