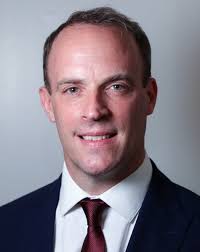 British Foreign Secretary, Dominic Raab, has called on the Nigerian Government to immediately probe the shooting of End SARS protesters by soldiers at the Lekki toll gate on Tuesday night.

Raab stated this in a tweet on Wednesday, moments after the incident was discussed at the UK Parliament.

“I am deeply concerned by the violence in Nigeria, including widespread reports of civilian deaths. We call for an end to all violence.

The Nigerian government must urgently investigate reports of brutality by its security forces and hold those responsible to account,” he wrote.

Soldiers had on Tuesday shot at unarmed protesters at the Lekki toll gate plaza barely hours after Lagos State Governor, Babajide Sanwo-Olu, had imposed a curfew on the state.

Although the governor said only one person died in the incident, eyewitnesses claimed several persons died in the attack.