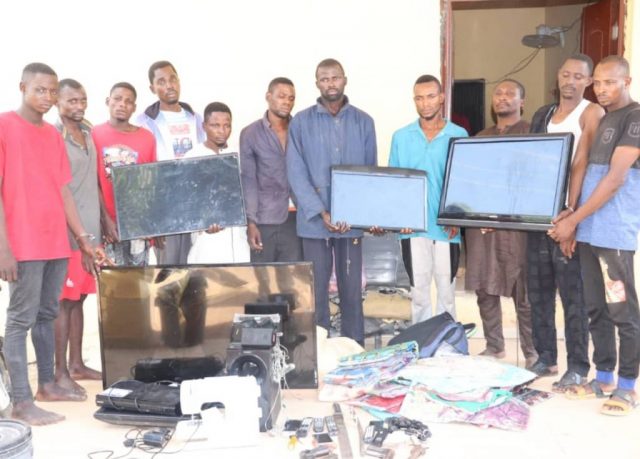 The Niger State Commissioner of Police, CP Adamu Usman has paraded 13 suspects over alleged armed robbery and other offences in the State.

Out of the 13, eleven (11) suspects were said to be notorious armed robbers, terrorising Minna metropolis.

The CP, who stated this during a press briefing in Minna, said the gang of eleven was involved in the recent armed robbery attacks unleashed on Barkin-Sale, Bosso-Estate, Maitumbi, Morris and Shango areas of the town in the last two months.

He stated that the syndicate robbed people of their valuables and carted away about six vehicles in Minna.

Exhibits recovered from them include One Barreta pistol, One Brownie pistol, One locally made pistol, Two live ammunition, Four lives catrigdes, One Peugeot 206 with Reg No YAB 719 LH and five plasma televisions.

The Commissioner, who explained that the suspects all confessed to be the syndicate who participated in the robberies, also said efforts to arrest the receivers and recover other vehicles were in progress.

Similarly, Usman revealed that one Sulaiman Abdullahi aged 40yrs ‘m’ of Mailamba-Agwa Village via Tegina, Rafi LGA was arrested falong Tegina/Zungetu road or being in possession of a locally made fabricated rifle with fourteen (14) rounds of 7.62mm live ammunition.

According to him, the suspect confessed to have bought the rifle at the rate of seventy thousand naira (#70,000:00k) through his late brother one Sani Abdullahi. Case under investigation.

Further more, the state Police boss revealed that the command nabbed an Indian Hemp dealer, Godwin SNU conveying 70 bags of dried leaves suspected to be Indian Hemp to one Martins Okwor from Abuja to Gwada area of the state.

He added that out of the number, 50 bags have been collected, while efforts are on to recover the remaining 20 bags.