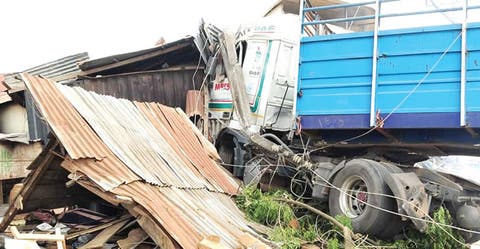 Some angry youths have set ablaze a truckload of rice after 16 people were killed and many injured in a fatal accident that occurred at the Ibaka area of Akungba Akoko, Akoko West Local Government Area of Ondo State on Saturday.

According to the Federal Road Safety Corps, the truck, which was fully loaded with bags of rice, rammed into a market in the area and killed 16 persons.

The accident was said to have occurred when the truck had a brake failure, and in the process, crushed a Toyota Camry and a Toyota Corolla, as well as three motorcycles.

On Sunday, it was learnt that some youths in the town, who were furious about the accident, set ablaze hundreds of bags of rice in the truck.

Attempts to burn down the trailer were frustrated by men of the Nigeria Army who reportedly rushed to the scene to prevent breakdown of law and order.

It was gathered that the protesting youths, who sang solidarity songs, blocked the Ikare Akoko-Owo Expressway, halting vehicular movements on the road for hours.

The Corps Marshal of the FRSC, Dr Boboye Oyeyemi, urged local governments in the country to relocate markets from highways.

Lamenting the loss of lives and damage to property occasioned by the incident, Oyeyemi, in a statement titled, ‘Akungba crash claims 16 lives, FRSC advises LG authorities to relocate markets,’ explained that “the crash occurred around 6.30pm on Saturday, October 31, 2020, when a DAF truck loaded with bags of rice rammed into the stalls in the market and crashed into a Toyota Camry saloon car, a Toyota Corolla car and three other motorcycles.

The traditional ruler of Akungba, Oba Sunday Ajimo, while thanking the governor for the visit, appealed for the construction of a dual carriage road in the community, or creation of an alternative road for heavy-duty vehicles passing through the town.