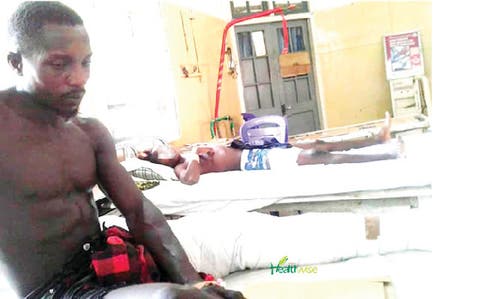 For survivors of Lekki Toll Gate shooting and their families, Tuesday, October 20 will remain etched in their memories for a long time to come. ADEBAYO FOLORUNSHO-FRANCIS returns to the hospital to see how those on admission are faring

One of the survivors of the shooting that marred the #ENDSARS protest at Lekki Toll Gate in Lagos, Meshack Esanibi, says the bullets he took into his left leg are yet to be extracted over three weeks after the incident that nearly claimed his life.

On October 27, PUNCH HealthWise reported the story of Esanibi who was rushed to the General Hospital, Odan, Lagos Island, after he was allegedly shot on the left leg by soldiers drafted to disperse the #ENDSARS protesters at Lekki Toll Gate.

Security agents had shot at the protesters at the Lekki Toll Gate on Tuesday, October 20, leading to yet-to-be ascertained number of casualties.

The shooting incident had also attracted national and international outcry, with the Lagos State and Federal governments being urged to unravel the identity of the shooters and who deployed them.

When PUNCH HealthWise checked up on him again in Ward B of the General Hospital, Esanibi sat on his sick bed.

Looking better than he was two weeks ago, Esanibi said he had been able to establish contact with a relative after his story was published.

The Delta State indigene, however, told our correspondent that he had been experiencing excruciating pain all over his body, especially on the affected limb, noting that the discomfort he felt might be because the bullet had not been extracted from his leg.

“Since I was admitted after the Lekki toll gate shooting incident, the bullet has not been removed. It is still in my leg.

“I don’t even know whether the bullet was the cause of the intense pain I am feeling. But I was told by a doctor that I will soon be taken into the theatre again.

“Even the result of the X-ray done on my leg was not given to me. But I observe that the doctors have it on their phone from where they assess it from time to time,” he said.

Continuing, Esanibi said he had not started using his leg. He, however, said that his gunshot wounds are being attended to regularly.

No blood, no surgery

In a text message to our correspondent, the Medical Director of the hospital, Dr. Ismail Ganikale, said Esanibi desperately needs blood for surgery.

“He needs family members or friends to donate blood. Blood is not sold; someone has to donate for him.

“Arrangements being made for blood should be fruitful soon,” Ganikale said in the message.

Esanibi told our correspondent that he was in dire need of blood donors before his surgery can be carried out.

“I have been told that the only thing delaying my surgery is blood. One of the doctors explained that I lost too much blood as a result of the bullet wound I sustained and would require at least two pints of blood.

Consequently, I sent for my sister to come for the test, but she was rejected. I was told she did not look fit to donate blood.

“Even the medical director visited two days ago and expressed concerns about my case. He said the hospital had made attempts to procure the blood but didn’t see any,” he lamented.

As he spoke, he kept throbbing the affected limb which was dressed in new bandages.

Esanibi explained that though the wound appeared to have healed, he was told to avoid putting it under pressure.

“I was told the surgery would have been done and the bullets removed two weeks ago if those two pints of blood had been available.

“But the doctors have reassured me that I have nothing to fear about the danger of having a bullet in my body.

“They said there are still some people moving around today with bullets lodged somewhere in their respective system,” he said.

Lamenting his predicament, Esanibi said, “Honestly, I have no one to reach out to at the moment because all my relatives, including my only surviving brother, Jonathan, are presently in Delta State.

“I cannot even reach a couple of friends I know for help as a result of the wallet and phone I lost during the Lekki toll gate shooting.

“Having spent one month on this sick bed, I am tired and just want to leave.”

I was invited to buy car in Osun, says ex-banker arrested for robbery