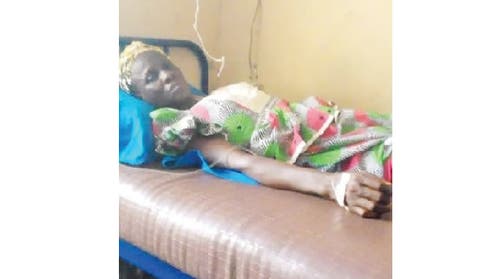 Iyaloja of Isua in the Akoko South-East Local Government Area of Ondo State, Mrs Helen Edward, and 15 others were kidnapped along the Akure-Owo Expressway. All the victims have regained their freedom. Edward, who spent five days in the den of the kidnappers, narrates her ordeal to PETER DADA on her hospital bedWhere were you coming from when you were kidnapped along the Akure-Owo Expressway?

I am a trader; I travel to the North to buy goods and I sell in Ondo State. I was coming from Akure where we attended a meeting. Some others and I represented our local government area at the meeting. The people in the team included members of NULGE (Nigeria Union of Local Government Employees), Head of Department, Community Development, Alhaji Mumuni and Mr Akinola.How were you kidnapped?It happened as we were returning from the meeting in Akure. When the bus that conveyed us, which was the local government legislative council vehicle, got to Ogbese town, some of us bought snacks. Less than five minutes after we left Ogbese, that is, between Ogbese and Uso (along Akure-Owo Expressway), some men with guns suddenly stopped us. They were about 10 in number – five in the front and five behind us. They also stopped three other vehicles. They robbed the occupants of those vehicles. Then they asked us to get out of the bus and took us into the bush. The occupants of the other buses were also kidnapped. The kidnappers had Ak47 rifles and they were shooting into the air.How many of you were kidnapped on that day?We were many because some travellers going to Lagos and Ibadan were also kidnapped. Our mobile phones and money were taken from us by the bandits. All the money in my bag was taken.Where were you taken to by the kidnappers?We were attacked at exactly 2.30 pm. They led us on a journey inside the forest for several hours at gunpoint. We crossed rivers. It was God that saved me; I could have drowned in one of the rivers. Around 6pm, we met a man and his child and they asked him for direction in the bush. After the man gave them the direction, they also kidnapped him.

What did they say to you at their den?They did not say much to us other than to threaten to kill us. They always said they would kill and waste us. The maltreatment got worse when one of us escaped in the night. They were angry that one of us escaped so they started beating us. They tortured us as if we were animals. Whenever they wanted to go somewhere, they would leave four of them behind with guns and sharp cutlasses to make sure we did not escape.

What were they giving you to eat in those five days?We were not fed at all; no food, no water in those five days. We saw hell in those days (Those days were a living hell). I had never experienced such maltreatment in my life. As I said, we were treated like animals.Do you suspect that the bandits knew you would be on the road when they attacked?

Yes, I suspect that because I discovered that the kidnappers had informants in the towns around there. They usually had telephone conversations. Every time, they were calling their informants who supplied them information about what was going on in the towns in the area.At what point did they release you?They released us when they were satisfied with the ransom that was paid. Initially, they demanded N100m, but when we could not afford that, they reduced it to N11m, and later to N5m. And I want to use this opportunity to appeal to Governor Rotimi Akeredolu to assist me as all the money I was using to trade went into the payment of the ransom. I will also call on the government to provide security for all travellers taking that route.

With your experience, how do you think cases of kidnapping can be reduced in this area? I think kidnapping can be reduced in our area if the government can allow farmers to use the land in the area. Government should open up the forest reserve where these criminals hide and perpetrate the crimes. This can be done if the government is really serious about eradicating the menace.