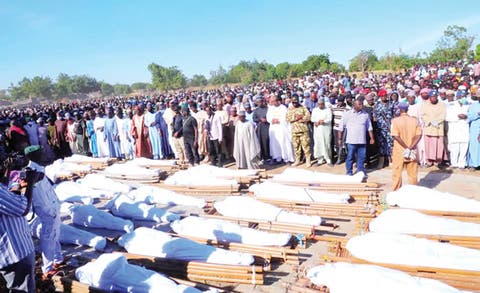 The Senate on Tuesday again asked the President, Major General Muhammadu Buhari (retd.), to sack the service chiefs over their failure to secure Nigerians.The upper chamber of the National Assembly, which said security situation had deteriorated to a level, where Boko Haram mounted roadblocks in some parts of Borno State and collected levies from farmers, also asked the President to restructure the country’s security architecture.

Tuesday’s call for the service chiefs’ removal was the third by the Senate. The latest call followed a motion by Senator Kashim Shettima on the recent killing of rice farmers in Borno State by the Boko Haram insurgents.Since Saturday when the Boko Haram insurgents killed no fewer than 43 rice farmers in the state, service chiefs have come under attack by Nigerians, who have demanded their removal.On Tuesday, the Senate again joined the call for the removal of the service chiefs. The upper chamber of the National Assembly also demanded a probe into the allegations of corruption levelled against some military leaders.

The red chamber also stressed the need to urgently recruit 10, 000 personnel into the civilian joint task force because they would know their areas.Loss of lives too many, Lawan lamentsPresident of the Senate, Ahmad Lawan, who presided over the session, lamented the recent killing.Lawan said, “It is now important that the executive should implement the latest resolutions because they are not frivolous.

Enough of excuses. ,Those who have nothing to offer in terms of securing the country, should be shown the way out. The security of Nigerians should take the centre stage. Time has come to find a solution.”In his contribution, the Chairman, Senate Committee on Judiciary, Human Rights and Legal Matters, Opeyemi Bamidele, said if the President should retain the service chiefs, he should retire them and constitute them into a presidential advisory council on security.

In the motion, Shettima noted that if Buhari refused to sack the non-performing service chiefs, it then meant that he had also failed in his responsibilities as commander-in-chief.“Whatever it is that the present security chiefs are doing, is not working or at least not enough.“If the President insists that the security chiefs are doing their work well, then the logical implication of such assumption is that the President himself as the constitutional commander-in-chief of the country has failed in his most rudimentary assignment of securing the nation. I hope the latter is not the case.

Protecting the lives and property of citizens is the primary obligation of government and any government that cannot discharge this basic obligation loses any iota of legitimacy.”The Chairman, Senate Committee on Army, who is from Bornu State, Ali Ndume, said the military should justify funds released to it because the soldiers at the war front were poorly kitted.He said, “Soldiers at the forefront of the operations are sharing ammunition. They are not well kitted. Some of them don’t even have helmets or bulletproof vests.

They don’t have new AK-47 rifles at the war front. Insurgents have started demanding levies to allow farmers into farms.“Boko Haram has started mounting roadblocks. If the Federal Government is serious, we could wipe out insurgency within six months.”Senate demands return of mercenariesThe Senators who contributed at plenary also demanded the return of foreign mercenaries to fight the insurgency.

Ndume said, “In the past, we had intervention in form of mercenaries which we rejected .We should stand up and do what it takes to secure our land.”The senators also wondered why Buhari did not personally visit Borno State but resolved to send a delegation to commiserate with the beleaguered peopleBuhari’s Senator says President’s best not good enoughAlso at the plenary on Tuesday, the representative of the President in the Senate, Baba Kaita, said Buhari had failed in his responsibility to secure Nigeria.

The Senator, who is representing Katsina North Senatorial District, stated this in his contribution during a debate on the motion moved by Shettima.He also said the excuses for the poor performances of the military were no longer tenable.Kaita condemned a statement credited to a presidential spokesperson, Garba Shehu, describing it as irresponsible.He stated, “I totally believe the President is doing his own best but then doing your best is not enough when we cannot see the result on ground and this is what is happening.

We cannot be mourning our citizens in and out every day. We cannot accept again the explanation coming from the military, every time there is an attack like this.”The Senior Special Assistant to the President on Media and Publicity, Garba Shehu, said hiring and firing of service chiefs remained prerogative of Buhari.He said since their appointments were not tenured, they were free to remain in office once the President is satisfied with their performance.

Shehu said this in an interview with one of our correspondents amidst renewed calls for the sack of the service chiefs that trailed the last weekend’s killing of 43 rice farmers by insurgents in Borno State.

He said, “The answer has not changed. The same call was made during the time of Saraki (former President of the Senate.“We have replied many times and our response has not changed. Service chiefs’ appointments are prerogatives of the President.

Their appointments are not tenured, so the President can hire and fire. If the President feels satisfied with their performance, so be it.”The presidential aide had, on Monday evening before the Senate joined in the call for the sack of the service chiefs, said a similar thing in an interview with Arise TV .Reps invite Buhari, demand explanation on rising insecurityAlso on Tuesday, the House of Representatives invited the President to appear on the floor of the parliament and explain the rising spate of insecurity in the country.

The House, however, did not specify when Buhari would to appear.Members of the Borno State caucus had moved a motion of urgent national importance on the killing of farmers in the state.The sponsors were Ahmed Satomi; Chief Whip, Mohammed Monguno; Zainab Gimba, Muktar Betara, Bukar Gana, Haruna Mshelia, Ahmadu Jaha, Ibrahim Bukar, Usman Zannah and Abdulkadir Rahis.Part of the prayers was to invite Buhari to appear on the floor of the House and address the lawmakers in plenary.

Efforts by the Speaker, Femi Gbajabiamila; Majority Leader, Alhassan Ado-Doguwa; and Chairman, House Committee on Air Force, Shehu Koko, among others, to have the prayer dropped proved abortive, as the lawmakers were sharply divided.Gbajabiamila’s plea that a state of emergency be adopted instead was also rebuffed.Some members, who were visibly angered by the move to change the prayer, chorused “no” each time the Speaker and other leaders attempted to pacify them.

The Speaker was forced to ask the lawmakers to have an executive (closed-door) session.Trouble began on Tuesday when Santomi presented the motion but excluded the prayer urging the House to invite Buhari.Instead, the lawmaker asked for declaration of a state of emergency on the insecurity in the country.Jaha, who is one of the co-sponsors, however, raised a point of order to fault Santomi for excluding the prayer to invite the President.

The lawmaker stated that the lawmakers were not representing themselves in the parliament but their constituents.Jaha insisted that the prayer to invite Buhari should be included. Gbajabiamila, however, pleaded with Jaha to withdraw the prayer due to the nature of the security issues.Ado-Doguwa said though he was in support of the motion, it would be out of place to invite the President to come to House to explain security situation in the country.

While Koko said the leadership of the House should, instead, interface with the President, lawmakers in support of the invitation shouted him down, screaming, “No!”The Speaker, who was surprised by the outbursts, said, “I am a little disappointed by these shouting downs. So, we are going to dissolve into the executive session to resolve this issue.”Emerging from the closed-door session that lasted about 45 minutes, Gbajabiamila asked Jaha to make an amendment to the motion. Jaha prayed the House to invite the President as proposed in the original motion.

Earlier in his opening address, the Speaker said the Federal Government or the military could not claim to have reclaimed territories occupied by insurgents if indigenes of the communities could not live and work in the areas.Meanwhile, some residents of Zabarmari, where insurgents killed farmers, said the military did not ask them to get clearance before cultivating their farms.They wondered why Shehu said they needed clearance before harvesting.

Some of the elders, in separate interviews described the statement by shehu as insensitive.One of them, Zanna Boguma, stated, “Those farmers did not need any clearance from the army. Soldiers themselves know that the settlement there is a farming community and their farms are not far from their homes.”A resident of the community, Mohammed Abdallah, asked, “ If I may ask, did we seek for clearance from the army before farming? Why is the Presidency giving excuses for her negligence and failure.”