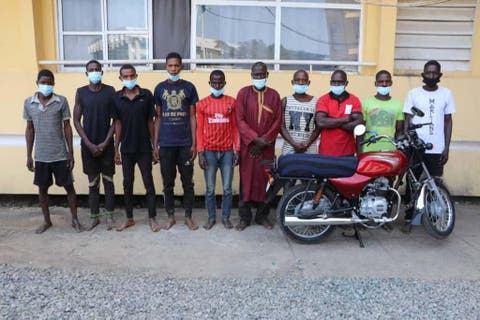 In continuation with its relentless effort to rid the Federal Capital Territory of kidnappers’ activities, the FCT Police Command has arrested eleven (11) suspected kidnappers operating along Kwaita-Kwali, Kuje, Bwari and Karshi axis.

Others are Abubakar Usman 55years, and Abubakar Abdullahi 25years all males.Exhibits recovered include One (1) unregistered Bajaj motorcycle, cash sum of three hundred and forty thousand naira (N340,000)and one(1) techno phone.In a similar development, Police Operatives from Karshi Division rescued a 10-year old kidnap victim, trailed and arrested the suspects linked to his kidnap along Angwan Boyi-Karshi axis on 5th December, 2020.ASP Yusuf said, “The suspects are: Lalo Bode 24years, Dahiru Aliyu 20years and Rabo Yusuf 20years all males who confessed to the crime and other criminal activities along Karshi axis.

While stating that the FCT Command will not rest on its oar in ensuring the safety of lives and property within the FCT, the Command wishes to reassure residents of a hitch-free Christmas/Newyear celebration”