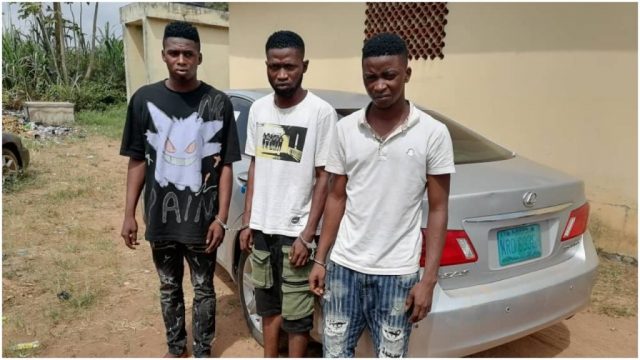 The teenager had told the police that she was forcefully dragged into the car and driven away to Rationwa area, where the guys allegedly took turns to rape her at gunpoint.“On the strength of the report, the DPO of Ilese division, SP Yakubu Bala, mobilised his men and stormed their hideout, where one of the suspects was arrested. The arrested one led the police to the other two and they were subsequently arrested,” police said.Confirming the incident to DAILY POST on Tuesday, Abimbola Oyeyemi, the Ogun State Police Public Relations Officer, said the suspects admitted committing the crime.

On interrogation, they confessed committing the crime, they claimed to have believed that the police are no longer working, hence they can do anything they like. But they were surprised when police came after them.The state Commissioner of Police, Edward Ajogun, has ordered the transfer of the suspects to the state CIID.The CP also warned criminals who have the erroneous belief that the police has been subdued to be careful, warning that they will meet their waterloo in no distant time.