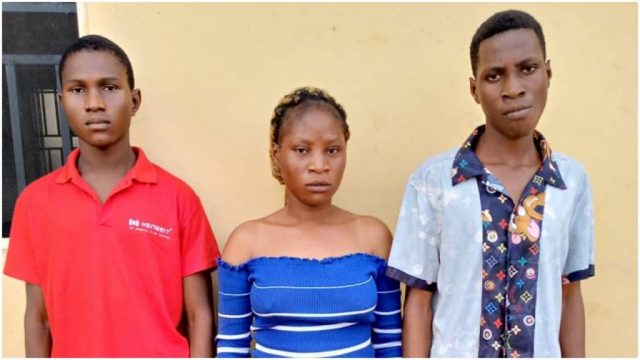 Two siblings and one other person were on Tuesday arrested by operatives of the Ogun State police command for threatening and making an attempt to kidnap and wipe out their former employer and his family.The suspects, who were identified by the police as Miss Blessing Oyeleke, 23; Mr David Oyeleke and Mr Kabiru Oniyitan, were apprehended following a report at Onipanu divisional police headquarters, Ogun State, by one Mr Makinde Oluwatoyin, the MD of Precy Company, Ota.

Ogun police image maker, Abimbola Oyeyemi, confirmed to DAILY POST on Wednesday that Oluwatoyin reported on December 4 that he received a phone call from an anonymous caller, threatening “to kidnap his son, Solomon Makinde, from school and wipe out his entire family if he failed to pay the sum of N2 million to a specific bank account within three days.”According to Oyeyemi, the caller described his child’s school and the location of his residents, suggesting that he had been under their surveillance for some times.

Upon the report, the DPO of Onipanu police division, CSP Bamidele Job, embarked on intelligence and technical based investigation by detailing his detectives, it was learnt.“Their efforts paid off when one of them was traced to her hideout and was arrested with the phone which they were using to make calls to the man. Her arrest led to the subsequent arrest of her two other accomplices, while the remaining one is still at large.

On interrogation, they confessed to have jointly planned the crime together, having worked in the man’s company before and know his financial capacity,” the Ogun police spokesman said in a statement.The state Commissioner of Police, CP Edward Ajogun has ordered that the case be diligently investigated by the anti-kidnapping unit of the State criminal investigation and intelligence department, police headquarters, Eleweran, Abeokuta.