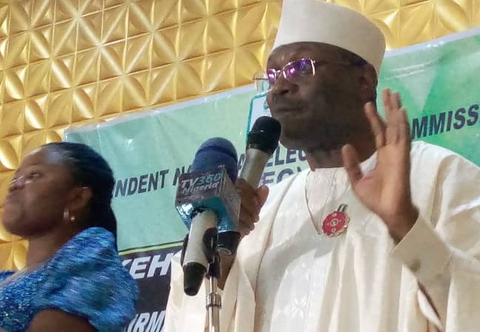 The Chairman of the Independent National Electoral Commission, Mahmood Yakubu, on Wednesday said preparations for the 2023 general elections have started.He said the commission would work with the National Assembly to ensure a speedy passage of the amendment to the nation’s Electoral Act in order to confront the challenges ahead.Yakubu said this in an interview with State House correspondents shortly after he took the oath of office for his second term.He took the oath before the President, Major General Muhammadu Buhari (retd.), at the commencement of the weekly meeting of the Federal Executive Council, at the Presidential Villa, Abuja.The INEC chairman said, “We have clearly demonstrated in recent elections that elections are getting better and they will continue to get better.“The National Assembly is holding a public hearing on the amendment of the electoral legal framework. This is important and this time around, working with the National Assembly, we will ensure a speedy passage of the amendment bill and once it is assented to, it will help us enormously in confronting the challenges ahead.“Preparations for 2023 general elections have proceeded in earnest. We need certainty and therefore the electoral legal framework is fundamental, without which we cannot formulate our regulations and guidelines.

Without our regulations and guidelines, we cannot conclude work on the manual for the training of ad-hoc staff for the elections.”The brief ceremony was witnessed by Vice-President Yemi Osinbajo; Secretary to the Government of the Federation, Boss Mustapha; Chief of Staff to the President, Ibrahim Gambari, National Security Adviser, Major General Babagana Munguno (retd.), and some ministers.