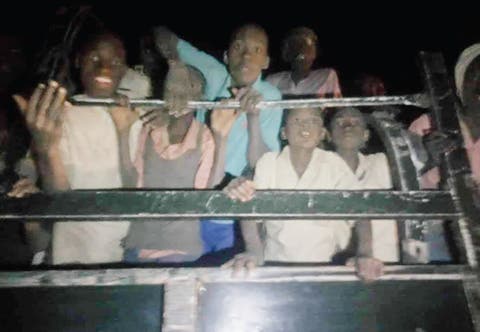 GOVERNOR Aminu Masari Thursday night confirmed the release of the abducted students of Government Science Secondary School, Kankara.The governor said the boys were at Tsafe, Zamfara State, and would be transported to Kankara on Friday.According to him, the release of the boys was facilitated by the leadership of MACABAN/Miyetti Allah.The governor’s Special Adviser on Security, Mallam Ibrahim Katsina, also confirmed the development.He told The PUNCH on Thursday night that “Allihamdulillahi, the boys have been rescued and are now at Tsafe, Zamfara State. But, we shall be moving them to Kankara tomorrow (Friday).”We didn’t pay any ransomHowever, Masari in an interview with DWTV Hausa at 10pm on Thursday, said no ransom was paid before the boys were released.When asked if ransom was paid before the release of the boys, he said, “We did not pay ransom to the kidnappers, it was purely negotiation.”Explaning how the boys were released, “One hour ago, Nigerian soldiers and government officials that were involved in the negotiation for the release of the kidnapped schoolboys have told us that the whole school children have been released, 344 of them. “Those involved in the negotiation include my adviser, some top military and police operatives, members of Miyetti Allah; (they) where all involved in the negotiation.”He also said those who kidnapped the boys were not Boko Haram.“They are bandits who kidnapped the schoolboys, not Boko Haram.”Recall that the gunmen suspected to be bandits abducted the students last Friday night from their school’s hostel in a Gestapo-like action.Police confirm release of Kankara schoolchildrenSpeaking with The PUNCH, the Zamfara State Police Commissioner, Usman Nagogo, said the boys would be handed over to Katsina state Government as soon as investigation into their health condition was concluded.Nagogo maintained that all the schoolchildren were looking healthy, adding that none of them complained of any ailment.“The boys are healthy but looking very tired; we will hand them over to their state as soon as possible.”The CP, however, did not mention whether any ransom was paid before their release.Earlier, before the students’ release from captivity on Thursday, the Boko Haram sect had claimed that it released a video showing the kidnapped students of GSS, Kankara in Katsina.The video showing some students inside a forest was released barely 24 hours after the Katsina State Governor, Aminu Bello Masari, insisted that the terrorist group was not responsible for the abduction of over 344 students of GSS Kankara.But one of the terrorists, who spoke in the background, was heard saying “This is to show the Governor of Katsina State that the boys are in good health. Look at them, look at them; by merely looking at them, you will see that they are in good health.”The over six-minute long video was released by the sect to ostensibly dismiss claims by Masari and the Nigerian Army that it (Boko Haram) was not responsible for the mass abduction.However, following prompting from some of the terrorists, a boy in the video with several of his captured colleagues in the background, who spoke intermittently in Hausa and passable English language said, “Please dissolve any kind of school, excluding Islamiyah.“We are pleading with the authorities to please recall the soldiers and the airplanes; they cannot do anything to these people (Boko Haram members); please.”Buhari welcomes abducted Kankara students’ releaseReacting to the latest development, the Senior Special Assistant to the President on Media and Publicity, Garba Shehu, quoted the President, Major General Muhammadu Buhari (retd.), as welcoming the release of the kidnapped students of GSS, Kankara, Katsina State.

Shehu in a statement quoted the President as describing their safe return as a big relief to their families, the entire country and international community.Parents deny knowing students in B’Haram videoBut some parents of the abducted students of GSS Kankara and residents have dismissed the video purportedly posted by the Boko Haram sect on Thursday morning, showing some youths in captivity in a forest.A father of one of the students, MallamAminu Dayyabu, said none of the youths showed in the video was a student of the school.Dayyabu, whose 12-year-old son, Farouq Aminu, was among the abducted students, however, prayed that the bandits did not kill the students in retaliation for any other steps taken by the government apart from negotiation, to secure the release of the students.“None of the students shown in the video, including the older one, who spoke in Hausa, was a student of the school.“I will appeal to the government not to use violence to get the students freed. The bandits and members of the Boko Haram sect are parents too and would not want to harm the students. But Almighty Allah knows the best.”Another woman, Murjanatu Danja, who is a mother of another abducted student, Hussaina Nasiru, said the faces in the Boko Haram video were not that of abducted students.She said, “The faces in that video are not that of the abducted students. Even if I cannot identify other faces, I should be able to identify Hussaina’s face. But the faces are strange.“I appeal again that government should secure the release of our children before their abductors take them far from home