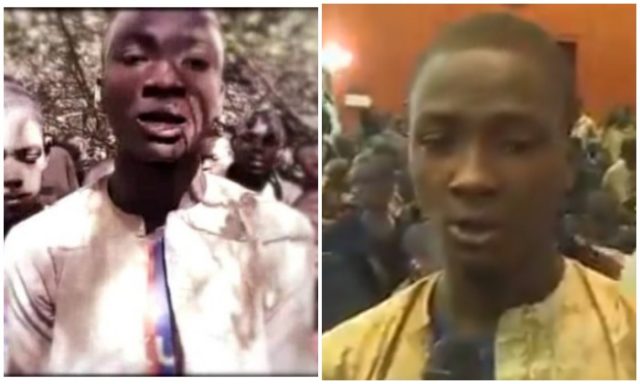 One of the freed schoolboys of Government Science Secondary School, Kankara, Katsina State, has narrated his six-day ordeal in the hands of his abductors.

The student, who claimed he featured in a video released by Boko Haram on Thursday, said he was “convinced” by the kidnappers to speak in the video.“I don’t know who they are but they said I should say they are Boko Haram —gang of Abu Shekau,” the student said at the Katsina State Government House on Friday shortly after Governor Aminu Masari received the 344 abducted schoolboys.Gunmen had invaded the school premises last Friday and abducted over 300 students after a gun duel with the police.

The abduction took place some hours after the President, Major General Muhammadu Buhari (retd.), arrived in Daura, Katsina for a week-long private visit.Leader of terror group Boko Haram, Abubakar Shekau, later released two video footage claiming responsibility for the dastardly act.But speaking on Friday after his release, the student, who claimed he was the teenager who featured in a video purportedly released by Boko Haram on Thursday, said from “what I experienced, they (his captors), are not Boko Haram

The teenager, who spoke on Arise TV monitored by The PUNCH, further said, “Sincerely speaking, the gang of armed robbers was very scared of what was happening from the jets. They assigned me to speak directly from the video to tell the government to stop sending the army and jets, if not they were going to kill us

We suffered a lot physically, they beat us morning and night. They only gave us food once in a day and water twice in a day.

Some of those who beat us are just tiny boys with big guns.”Meanwhile, the Katsina State governor said the schoolboys would receive proper medical attention before they are reunited with their families.