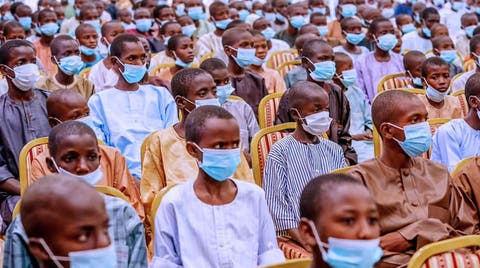 I’m extremely worried, security agencies not doing enough – BuhariShortly before addressing the pupils, the President pledged not to betray the trust reposed in him by Nigerians. He said a lot must be done to improve security, adding that his government was aware of its responsibility to secure lives, The Cable reported.“It is our responsibility to secure this country for all the citizens to do their businesses without any problem. We haven’t achieved that yet, but we will keep on trying“I’ll continue to be loyal to this country. I have asked for this mandate; I got it; I must avoid any excuse for failing to perform.“On the issue of insecurity, I’m extremely worried about it, and I hope next year it will be different. Those among the law enforcement agencies that would remain in charge would be extremely busy.“We have a lot of work ahead of us and some of these things we may not say because I don’t want to compromise the security and efforts being put in place by the law enforcement agencies.“But really, we are accurately aware of our responsibilities. Our responsibility is to secure the country – so we have a lot of work to do.“Armed forces know their job. I meet them, we have security meetings from time to time, they must be very clear about my instructions, and their effort is not good enough for me.”The President, who had been in Daura since last Wednesday, returned to Abuja after the meeting.Earlier in his address, Governor Aminu Masari had told the President about the traumatic experience the students had in the hands of their abductors.He said, “These students returned barefooted. None of them wore any slippers or sandals while they were being brought here.”Masari however thanked God, Buhari and security agencies for their efforts in getting the pupils back safely.The governor said the pupils would be taken to a secure facility, where they would bathe and change their clothes, and thereafter given medical attention. He added that the names of all the affected pupils would be documented, and that parents, guardians and the school management would be involved in identifying them before being reunited with their loved ones.Masari said no ransom was paid before the pupils were set free, adding that security would be improved in schools across the state. He added that the release of the students was facilitated by the Miyetti Allah Cattle Breeders Association of Nigeria, which engaged in talks with the bandits.The pupils were brought to the governor by the Commandant, 17th Brigade, Nigerian Army, Katsina, Brigadier General Wakili Idris.Meanwhile, the debriefing of the pupils is expected to begin on Saturday (today).