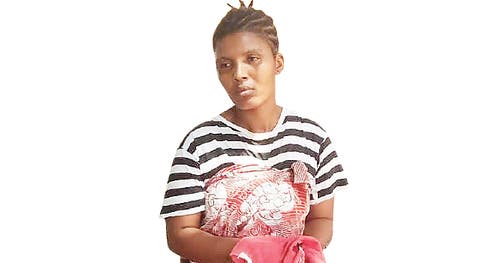 How did you get into Florence Ogbona’s baby factory?I was in my state in 2019 hawking some wares when I told my brother in the village that I was tired of selling and that I wanted to work as a domestic help, if there was any way he could help me. My brother told me he knew one woman that runs a beer parlour (pub) in Lagos. He said she pays N20,000 per month. I was pregnant then. I spoke with the woman on the phone; she promised to help me. I went to her with my brother. We took off and arrived in Lagos about past 9pm. I was taken to the woman’s house in the night. My mum started calling me but the woman collected my phone and removed my SIM card. I saw a lot of phones there. I even saw a lady that had just put to bed. The woman gave me a wrapper and said I should follow those that brought me, Ebuka and Nabania, to a room because the woman was not living in the same place with them.

I met many people there, including Grace, Nkechi, Ginnika. The place is a big house with fence. I saw about five women and asked them what they were doing there but they in turn asked me the same question. I told them I was there to work; they told me the woman brought me there because of my pregnancy. I was surprised. They told me that if I gave birth to a baby boy, she would give me N200,000 but if it was a baby girl, it would be N100,000. They even warned me that there was a fine of N10,000 for noise-making in the house. Also, if anyone fought, the person would pay N20,000 fine; if you were told to do something and refused, you would pay N5,000 fine

We were locked up in one room. There was a girl that was brought from the East by her boyfriend; she was crying. I had to escape from the baby factory and went to the police station. From the police station, I was taken to the Stella Obasanjo Motherless Babies’ Home to be delivered of my baby there.What was your experience at the Stella Obasanjo Motherless Babies’ Home?I was there till I gave birth to my baby. My pregnancy was five months old when I got there, and my baby was six months when I was ejected one night by the officials.

My experience was painful. Almost all the staff member there didn’t do their job in the home. The grown-up kids in the home were the ones that they asked to clean up the handicapped kids. The staff members don’t do anything; it is the children that do everything, and if the children say no, they would take them to Asero (juvenile home) and make them suffer. What the staff are interested in is to take part of the materials provided for the children.

Were you ejected from the Stella Obasanjo Motherless Babies’ Home or you escaped?I was ejected; I did not escape. It was in the night that I was told to leave Stella Obasanjo Motherless Babies’ Home and that night I didn’t know where to go.So, what happened thereafter?I called Aunty Florence, the woman that runs the baby factory. At first I went to a church but they told me to go and report myself at the police station; that I couldn’t stay at the church. I begged them but they refused to accommodate me on the church premises. They said it was dangerous for them to do so because they didn’t know me.

I then called Aunty Florence through someone’s phone and explained the situation to her. She told me to come but I told her I was scared because she was going to take my baby from me and she would send me away. But she assured me that I would not be forced to give out my baby. She said if I wanted to give her the baby, I could but if I didn’t want to, I would not be forced. It was because of that assurance that I went back to her house

She asked me to take a cab to Mowe and I said I didn’t have money. She said I should not worry, that someone would come and take me from the park and pay the driver. So, I took a cab to Mowe and when I got there, one of her children came to take me and paid the cab driver.What then happened when you got to her place?When I got back there, I didn’t see Grace with her baby; I just saw her buying clothes and spending lavishly, and I asked them about her baby but no one answered me. I was later told that she went to Abia State to sell the baby; then I escaped the second time to report at the police station because she told me she could not let me go like that; that all the money she spent on us would not go in vain. When I got to her house, I had thought that she would give me money, so I could return to my village.

How will you describe the officials at the Stella Obasanjo Motherless Babies’ Home?The head of the home doesn’t have problem; sometimes she goes to the fridge to get us drinks and she also plays with us.But the other staff members there are the main issue. If they bring foodstuffs for the children, they will divide the food and give half to the children and take the other half to their homes. Most times when they bring out 15 packs of spaghetti, they cook eight packs of spaghetti for the children and take the rest home. If they bring bags of rice or noodles for the children as gifts, the staff members will hide them in the laundry and share them later.

It was mummy Odunsi that asked me to leave because I spoke the truth. She was one of those who share the food stuffs brought for the kids and whenever the head of the home asks me about it and I told her the truth, they would be calling me ‘amebo’ (talkative). She called one night and said I should leave. She opened the gate for me and pushed me away.